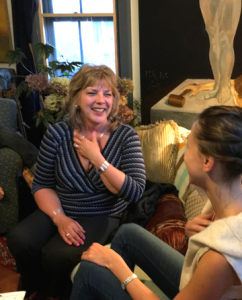 Students practicing tapping in an EFT Level 1 Workshop, Vermont, US

I have been working with "Karen" several times a month for over a year and a half. She originally came seeking help with health-related issues but she discovered that EFT could help with almost everything, so our sessions have addressed a variety of issues.

Recently, she took a break of a few months. When she returned, the main issue she brought in was a stressful situation on her job. She is a teacher and she had just been informed that her favorite class, a creative class she had developed and was looking forward to, had been taken away from her... and instead she had abruptly been assigned a much more demanding lower-level class. This would drastically change her whole semester.

As I listened, I was on the alert for tappable moments, as always. But there were none! Instead, I heard Karen describing her own skillful and graceful handling of a difficult challenge. She had already made her peace with it and didn't need any tapping!

It was clear that Karen had internalized much of what we had done in the previous sessions and was now skilled in helping herself. She reported that two things I often say had immediately come into her mind:

You're always just one thought away from moving in a better direction" (and that thought might be, I could tap).

All this emotion, all these anxious feelings, it's only energy" (and I can breathe and tap and change that energy).

She said those two simple thoughts had helped her not be overwhelmed. She knew her mind could spin things out of control, but these thoughts "broke the anxiety and negative train of thought."

She continued, "I remembered to breathe and step back -- and that there were things I could try:"

1) Feel it and acknowledge it.

2) What's one thing you could do to use this energy in a more positive way?

3) Remember to breathe deeply and calm yourself

4) Remember that action breaks the deadlock -- what's one small action you could take? (I could tap; I could go ahead and accomplish one small thing such as find a paper I needed; I could talk to someone, etc.)

As it turned out, Karen had done very little physical tapping but the setup language was so ingrained in her brain that the shift in her perspective came very quickly:

Even though I have to do this, I can accept myself, and sometimes you gotta roll with it...

Even though I can't teach the class I want, I love and accept myself, and it's for the greater good...

We were both smiling as we realized that she had already done all the work and I was just there to say, "you go, girl!" The little bit of tapping we did was just to affirm her success. EFT is really empowering! We did a celebratory tapping together:

Even though I had to deal with all that, I love and accept myself, and I honor myself for how well I handled it! I really do have the skills to handle whatever comes my way!

Betty Moore-Hafter, www.CreativeEFT.com, is an EFT International Accredited Certified EFT Master Trainer of Trainers and Advanced Practitioner offering EFT Level 1-2 and Level 3 Trainings several times a year. She also has a new EFT mentoring and support program at www.EmotionalFreedomMastery.com. Betty offers EFT sessions by phone and by Skype, as well as in person at her Burlington, Vermont office. You can find out more on both websites and pick up free gifts on each site.

From the EFTfree Archives, which are now a part of EFT International .
Originally published on February 9, 2013