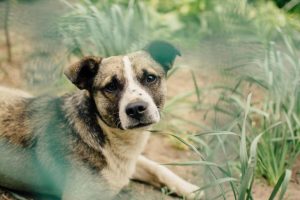 Ali is a beautiful speckled galgo that had lived in the fields in Torre Pacheco (Murcia, Spain) for the last year. The farmers were irate that Ali was destroying their crops and damaging their netting, which was expensive. Farmers in Spain do not view Galgos as pets, rather as pests and contribute to the brutality, maiming and abuse of these dogs. Ali was spotted on several occasions living near the farms and had become friendly with the farmer’s dogs in the area. She had remnants of a rope tied around her neck which left my friend, Tina Solera of Galgos del Sol, and me to assume that a farmer had tried to hang her earlier but she had managed to get away, possibly by biting through the noose. This rope, or what was left of it, was now cutting into her neck and the wound was turning septic.

Tina and some volunteers had tried on several occasions to catch Ali but she was too frightened and did not trust humans anymore and who can blame her after what she had possibly endured at the hands of her owners/captors? The farmers had warned Tina that if she did not catch Ali, they would poison her. In desperation, Tina laid traps for Ali and she had taken the bait of one, only for the trap mechanism to malfunction. The noise of the trap closing prematurely on Ali’s body frightened her more but there were also concerns that the trap-door may have caused some abrasions to her skin. Despondent at the several failed attempts, Tina asked me if I could help Ali before the farmers killed her. I agreed to help.

Last week (6th May), I visited the farms near Torre Pacheco and the area where Ali was often spotted. She had made a bed out of discarded agricultural netting in one of the fields. We saw her in the distance. As we approached, she bolted. The farmer’s wife admonished us for not catching the galgo sooner and threatened to kill Ali, if we did not catch her soon.

Tina, in desperation and concerned for Ali’s safety, had arranged for Antonio, the owner of Los Infiernos animal shelter, to tranquilise Ali with a tranquiliser dart. I asked Tina if I could at least try EFT on Ali before Antonio’s arrival. This would also save her money as she had agreed to pay Antonio € 50 for his effort. It was a race against time.

I could still see Ali in the distance and began to tap. I stated the intention first, which was addressed to Ali, asking her to trust Tina and me as all we wanted to do was to help her.

I placed myself in Ali’s position and tried to feel her emotions at this moment in time. The emotions I felt (Ali’s) were mistrust; fear of humans and their intentions; fear of being hurt againand the SUD was an 8. Using Ali’s emotions, I sat beside the busy road linking Torre Pacheco and Los Alcazares, and began tapping, to the suspicion of passers-by.

The Reminder phrases used in the short-cut EFT version were as follows:

At the corner of my eye, I saw Ali leave her hiding place and slowly as I tapped, she came within a few feet of me and laid down on the agricultural netting, still keeping an eye on me. However, she was still too far for us to put a collar on her but I was determining to persist.

To my anger, before I could commence a second round, Antonio turned up in his white van and trailer, which had another recently rescued dog in it. The dog in the trailer was frightened and was howling which frightened Ali away. We tried to coax Ali near enough so that Antonio could use his tranquiliser dart on her. She came within a few feet of his van, as I continued to tap to ask Ali not to be afraid. What choice did I have....Antonio’s dart or the farmer’s poison? Three times Antonio fired his dart and each time he missed. Ali was really scared and who could blame her? She ran away into the distance as fast as she could. We had to give up our efforts for the day. All throughout the car journey home, Tina expressed her anger at not being able to catch Ali. It really affected her so I told her to gather the volunteers at the shelter together and we would, as a group, tap for Ali’s safety by proxy. We decided that tapping at the shelter was appropriate as we did not want to scare Ali further with the sight of a group of people converging on her “area," especially after her traumatic experience with Antonio.

Tapping By Proxy and Borrowing Benefits

The next day, a few of use gathered at the Galgos Del Sol shelter and I asked one of the volunteers to represent Ali. I explained the principle and strategy of tapping by proxy and asked her to imagine herself as Ali, to experience her predicament. June, the volunteer, closed her eyes and placed herself in Ali’s position. I asked her what emotions she felt and she shouted, “Fear of being hurt again. Why have I done that they want to hurt me again?” We were all shocked at her outburst, especially Elaine, June’s common-law partner. Elaine said it was not like June to express emotions publically. She was an experienced tarot card reader and is used to keeping her emotions to herself. However, I took June’s lead and told the group to copy my actions. (I had earlier explained the concept of EFT by proxy and showed them how to do the “tapping rounds” I also explained the concept of “Borrowing a benefit” which encouraged the group further).

Even though I feel this fear of being hurt again and question why people want to hurt me, I trust myself.

This was repeated 3 times while stimulating the karate chop, to assist with Psychological Reversal that would neutralise Ali’s fears. I asked June for an Intensity Rating and she said it was an 8 (the same as in Torre Pacheco). I had earlier explained to June what and why and Intensity Rating was required and she could guess Ali’s rating.

I then asked June to take a deep breath and give me a SUD which she said was a 1.....a huge difference. June said she felt calm and no longer afraid .June laughed out aloud as she did not know what made her say those words. I explained that as Ali’s representative, she was merely manifesting Ali’s emotions. What was even more surprising was that as we tapped, all the Galgos in the refuge fell asleep at the same time which was unusual as they were hyperactive a few minutes ago. There was a female galgo called”Missy” that was recently brought to the shelter and was very nervous of men. Yet after the round of tapping, she went up to Richard, a volunteer, and rubbed against his knee. He was very surprised as he had been trying to befriend her over the last 2 weeks and she always ran away from him. Yet here she was, trying to get a cuddle from him! He was in his words “blown away." So Missy and Richard had received a “benefit” from the group’s tapping. I told the group to provide fresh water for the dogs as they would be thirsty after their “EFT induced” nap which was the result of energy moving through their bodies. I will be enquiring later if any of the other volunteers had borrowed a benefit but at the moment, our thoughts were on Ali.

Over the next few days, Tina contacted me to say that she was very concerned for Ali and would visit her makeshift bed every evening. Tina knew it was a race against time as the farmers were losing patience with her. I was not able to accompany her on her visits but told her that I would be tapping at home for Ali.

Each evening, I took a few minutes to tap for Ali using a picture(attached) of Ali in the fields.

I repeated this tapping sequence over 3 days and had asked Tina to let me know if there was any improvement in the situation.

On 16th May, I received an email from Tina asking me if I had been tapping, as she had managed to catch Ali. She attached some photos which showed her and two volunteers with a calm Ali! Tina told me that she did not have to chase Ali for she (Ali) had allowed her to approach and slowly put a collar on her neck. No resistance, no fear, just complete trust of Tina and her intentions. I can’t wait to see her at the shelter and I intend to tap further for her so she will remain calm and confident enough for her to be re-homed.


From the EFTfree Archives, which are now a part of EFT International .
Originally published Aug 30, 2015.