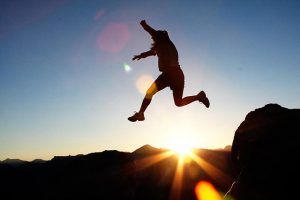 When my wife Linda and I were at our mentoring session with Betty (Betty Moore-Hafter), I asked if we could tap on my resistance to further weight loss.

I mentioned how as a child I was often told to play it safe, stay out of the limelight, be the best I could be without being seen. I was often told by my aunt that “little children should be seen and not heard.”

I had previously tapped on all these aspects and taken the charge out until they were 0-2 on the SUDS scale. I had forgiven my aunt, and my Mom for calling me “her little Butterball”. It seemed to me back then that it was alright to be plump.

Betty had me tap on “there’s a part of me that”…, a technique that I had already used on all those childhood aspects and issues. When Betty asked me what was the benefit to my being overweight, I realized that its kept me from attracting too much attention, and not having too much expected of me.

That triggered the memory of my army service, when I stepped into the limelight in a huge way! I was the first G.I. to demonstrate against the Vietnam War in uniform on an army post: we had a pre-approved ‘Pray-in” that was broken up at the last minute, and a photographer took a picture of me and my buddy being arrested and dragged off while on our knees praying. This picture catapulted me to the front page of most newspapers in the country…my parents and my hometown were quite surprised…I was unnoticed no more.

It was exhilarating and one of the proudest moments of my life, yet I had broken the family rule and disobeyed the writing on my wall.

There was danger involved: I was arrested, interrogated, threatened with a weapon, released, followed, and vilified by some. But I was a hero to many: I got to meet Bobby Kennedy and Martin Luther King, and received a letter from Jean Paul Sartre. I went on to literally help end the Vietnamese War. My father strongly disapproved at first, yet was very protective of me and came to support the end of the War.

As we tapped through it I realized that my subconscious was telling me to keep the weight on so I still wouldn’t be noticed. But our true nature is to succeed and shine… I am tapping down my perceived need to be heavy and hidden. And that wall is becoming MY wall!

A NOTE FROM BETTY
I've been thinking about how Stephen and I got to that breakthrough, and I would like to add two observations:

1. The "parts" language really helped. I always explain that every part of us is doing the best it can to accomplish something it believes is beneficial. "Is there a part of you that could be protecting you from something by keeping the weight?" That opened a new line of inquiry and it immediately came to Stephen's mind that he tries to stay just under the radar and not attract attention.

2. Once we began to explore this, it was in listening to Stephen's exact words that we finally got to the deeper core issue. Stephen was talking about how he always stays in "second place" at work or in other situations, "as if some part of me really doesn't want me to be in the spotlight." I was struck by that image, so I asked, "Was there ever a time in your life when you were in the spotlight?" Bingo.

We were both amazed at what had been revealed. The whole process was less than 1/2 hour, yet we had uncovered and tapped for a major core issue which had been, up to that point, completely unconscious. EFT does it again!

From the EFTfree Archives, which are now a part of EFT International .
Originally published on Nov 16, 2013.