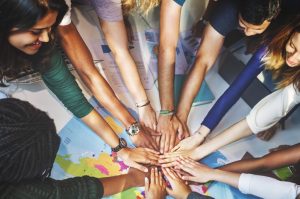 I have worked with many clients helping them release shame, guilt and fear of punishment related to how they identify with their religion. Each religion has its own way of inculcating limiting beliefs in us. At the same time religions also have many empowering facets that can be embraced once all the ‘should’ and ‘should not’ is out-of-the-way.

While working with a lady recently, we uncovered lots of shame towards her religion. Tapping (combined with inner child healing) on specific memories from her childhood, where she was forced to do religious practices for fear of being punished by her parents, helped her release the hidden hurt, shame and anger. We gently and slowly worked on each significant memory. After the tapping, she was in a place to embrace what felt right for her and discard what didn’t.

We often follow religious teachings out of fear and not out of our own will and understanding of the religion. This can also permeate in other areas of our lives – such as, it can give rise to the feeling that we are bad, unworthy etc. This often originates in our childhood. Children, who are subjected to frequent punishment when they don’t comply with the religious teachings/rituals, develop strong fear towards their religion.

When our religious identification comes from a place of shame or guilt or ‘must do’ attitude then working on it helps. When we release these feelings, we are free to choose what feels right for us in our religion, what feels peaceful, things that soothe and help us without the baggage of all the guilt and fear.

5 steps: A Geo-Specific Process for Becoming Comfortable with Your Religious Identity

1. Listing feelings of Shame and Fear without inhibition
The first step is to list down all your negative feelings about your religion while continuously tapping. It’s important to be honest with yourself and state “what you naturally feel” not what you “should” be feeling about your religion.

Given below are some of the common feelings:

When did you first feel the fear?
What was your age at that time?
What was told to you by your parents, teachers, religious leaders, peers etc?
Were you told that you would be punished by God if you didn’t follow the rituals?

In both these examples the fear of being punished was strong – either by parents, by God or both.

Take one significant memory of an event and release all the difficult feelings with EFT. At the end of it see how you feel in your body and how your younger self feels naturally (Younger self refers to what you felt as a child at a specific age). Then go to the next memory.

For example, when a client released her feelings of shame, I asked her to look at her younger self again and tell me how she felt; she replied that she felt happy. Though she had the memory of being there when she was asked to take part in religious practices, she didn’t feel suffocated anymore.

5. Integration
Now tap on all positive memories that you have about your religion; how has your religion helped you?
Example: At times of distress has it given you relief? Do you feel peaceful while doing a specific ritual? Do you like praying? Bring up these memories and strengthen the positive feelings by simply narrating these memories while continuously tapping.

You will know that you are peaceful about your religious identification when you feel that, such as:

You are not your religion. It’s just one part of your life.
You can discard, without guilt or fear, what doesn’t feel right for you and embrace what does.
You don’t judge others for following what they believe is right and don’t feel like influencing them with your beliefs.

Then truly you are liberated from the limiting beliefs of your religion.

A Note from Puja: Here is another article that focuses on working with hardwired cultural beliefs.

From the EFTfree Archives, which are now a part of EFT International .
Originally published  Mar 22, 2014.