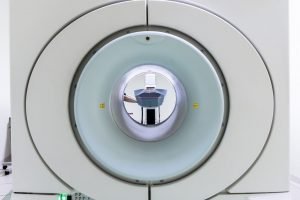 Terror in fMRI machines isn't uncommon. The scanner is large and cylindrical and the patient must lie still for half an hour or more. Some people feel trapped and can panic. One of these people was my new client ‘Julia,’ a claustrophobia sufferer. She told me that she had been so nervous during her first fMRI experience, following breast cancer surgery, that the staff had had to take her out of the machine twice, and the procedure didn't get done. You've probably heard of an fMRI scanner, but you may not know how it works. It's a machine that uses magnetic fields and radio waves to create pictures of body and brain functioning.

Before Julia's second fMRI experience she took medication to stay calm. This was successful, but Julia didn't want to keep medicating herself for subsequent scans. A week before her next fMRI appointment, she had an EFT session with me to see if she could get rid of her terror.

Julia and I met for two tapping sessions. She told me that inside the fMRI machine she needed to lay with her arms by her sides. Her lifelong claustrophobia history included panicking when her arms were pinned to her side, which had happened to her during games as a child. She didn’t know why.

In her first session we began with general stress release around the fMRI appointment. She remembered being in the machine twice, becoming frantic with terror, and then being pulled out twice. This memory was 10+/10. We moved onto using the Tearless Trauma process. Her SUDS came down steadily to zero. At one point, she reported a quick flash of actually wanting to get into the fMRI machine! So this session had taken an edge off the terror. But I felt one session wasn't enough. Claustrophobia has deeper origins.

Julia said her mother had made a connection between Julia’s terror of having her arms pinned to her side and her birth. She had told Julia about a birth trauma they had shared. A nurse had manually prevented the baby from coming out of her mother because a doctor was supposed to be present at every birth and he hadn't arrived. Because I came to EFT from twenty years as a transpersonal rebirther, I was familiar with this situation. This would likely have been reinforced through life experiences – such as the childhood games. I recommended another session before her appointment which was only days away.

So what does lying ‘imprisoned’ in a cylindrical machine have to do with being born? Well, maybe the very first time you found yourself trapped inside a narrow tunnel (birth canal), you went through some birth trauma, and claustrophobia was seeded. At the start of our second session Julia reported feeling ‘a lot more chilled out’ than in the last session. As the tapping continued, she found herself calmly envisioning the machine and lying inside it.

A memory flashed up. Among her struggles with the terror during the aborted fMRI attempts, she realised she'd had a short but pleasant experience of imagining she was in ‘a giant peaceful cave’. She didn’t know what to make of that. We then revisited her first fMRI experiences to identify any other aspects. She explained that she’d had to be pulled out of the machine because of terror triggered by pressure in her head. When I asked her to recall her panic in the machine when she had felt constriction on her arms, her SUDS for that now were only 6/10, and it reduced to 2/10. Next she volunteered that – unaccountably – she was remembering becoming anxious about ‘getting out in time’. ‘What time?’ she said aloud, ‘That doesn’t make any sense.’

By now I was aware that although Julia didn't realise it, her eyes had closed and she had spontaneously hooked back into a brief episode of reliving parts of her birth, a mini-rebirth triggered by her first encounter with the fMRI machine. I temporarily stopped the tapping to honor this deeper part of her process, which took only a few minutes. I always feel it's such a privilege to be present to hold the space for such natural healing events. Her sensations – head pressure, feelings of constriction, terror, anxiety about ‘getting out’ – were all indicative of sensations she had experienced in the birth canal. Her ‘giant peaceful cave’ was likely to be a flash of the peaceful womb environment before contractions began.

Next she became severely distressed, and started waving her hands above her head, moaning. She then said, ‘There’s something holding my head – pressure – something above my head.’

Daringly, I asked, ‘Could it be a nurse’s hand? You’re safe now, just breathe.’

She fell silent, and stayed still for a couple of minutes. Next, she looked floppy and said she felt strange, drugged. I confirmed to her then that she was reliving her birth sensations, and that if her mother had received pain medication or gas, the baby would have had it too.

Soon she said wonderingly, ‘That was massive. There’s sweat pouring off my back. But even when I was going through it, I felt calm underneath. What an experience!’

She opened her eyes and chose to continue the tapping session. We briefly reviewed memories of moments of fear and body sensations she had felt in the machine. Tapping had dissolved their emotional intensity. She was calm.

Testing in the fMRI

After her third fMRI appointment Julia updated me.

‘I was a little anxious before arriving at the imaging centre, so I did take half a tablet,' she said. 'I’m not beating myself up about that though, as I took one and a half tablets before, so that was an improvement in itself. I actually felt quite calm. I was pleased to see the scanner was only two-thirds the length of the last ones! However, I had to have a type of box, rather like a welder’s helmet, over my face. Yikes! I wasn’t expecting that!'

‘I lay back and closed my eyes, just asking the young attendant to keep talking to me regularly throughout the session, which he did. I must say I did not experience the crippling terror, nor did I have any thoughts of the head pressure. In fact, I was just thinking normal thoughts, not even having to stay focussed on being in a giant cave!’ (I had suggested this might be a ‘safe place’ in her mind if she needed it.)

‘The whole session lasted around twenty-five minutes. I had no panicky thoughts about having to get out “in time”. Thank you for your help in getting me through what used to be a huge ordeal!’