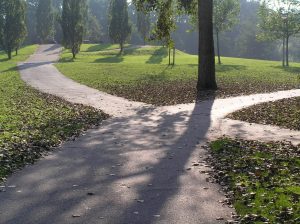 I listened to an insightful recorded audio conversation recently between Gwyneth Moss and Jondi Whitis on getting specific with EFT and using imagery to get to the "inner dog" where the emotions are. Normally I find doing EFT on myself to be very effective, particularly in addressing small anxieties or stress that appears daily. However, I was having great difficulty with a particular personal issue and found just tapping on my feelings and physical sensations would just get me more intense, and I felt it was just "too much" to deal with.

Being reminded of using imagery to allow the person to address the issue without going into detail made me think about using the same technique on myself. The result was pretty powerful, and I now use this technique a lot both on myself and with clients. My balancing statement is usually, "I love and accept myself and I'm okay," but I have shortened this to simply, "I'm OK."

I say the setup statement 3 times whilst tapping the side of the hand then do one round of tapping whilst saying words from the statement.

Over the last few weeks I had been really struggling with the feeling of not having any choice about a particular person in my life. I was an 8/10 for the general statement:

Even though (ET) I feel I don’t have any choices about 'B', I'm okay

ET I don’t know why this feels so intense, I'm okay

Instead of trying to think about what number I was, I said to myself if this was an image what would it be? I wasn't clear at first but it just felt like a big "stop!" – a stop where I couldn't go further. The "stop" felt strong maybe an 8/10:

ET it feels like being stopped and I can't go any further, I'm okay

I could still feel the STOP but it wasn’t that intense, probably 5 out of 10. I closed my eyes to see if there was an image and quite easily I could see myself at a crossroads. It was night time, no other cars about and no traffic lights. I was in a car and stationery. There didn't seem to be any intensity around being there and I checked into my body but felt fine. First of all I could only see the road ahead of me (no image to left or right yet). The feeling of not being able to go forward was a 7/10:

7/10. I asked myself why I thought I can't go forward so as to get more specific but I couldn’t think of anything so I just said

Even though I don’t know why I cant go forward but I just can't, I'm okay

The feeling of "can't go forward" was now a 0/10 (I probably could if I wanted to), so I then looked at the image to see what forward (across the crossroads) looked like:

ET forward is very dark and there is nothing there, I'm okay

The feeling of "don’t like going places I don’t know" seemed irrelevant now but I had a very powerful sense (a 9 out of 10). I continued tapping:

ET it's just really dark and there is nothing there, I REALLY don't want to go straight on and I don’t have to...I'm okay

I was aware that the word "forward" didn't seem right any more but "straight on" did. 4/10. I felt more accepting that I don’t want to go straight on and I began to see more in the image. There is a right and a left as well but they are not clear and I also know that I could reverse and turn round. I question myself as to what is stopping me. There was a feeling of I'm supposed to go straight on, but I know I don’t want to but I shouldn’t go right or left. That "supposed to" was a 7/10:

ET I now see a right and left, I feel I'm supposed to go straight on but I don’t want to...I'm okay.

That "supposed to" was still there but I now had a feeling that I could look at the other directions (as opposed to before I felt like I couldn’t look). I looked at reversing and turning round. I wasn’t intense about this but tapped:

ET reversing and turning round wouldn't be that easy and actually I don’t really want to....I'm okay

This made it more acceptable and I was fine. I wanted to test myself about the direction straight ahead so I looked there. This was still very dark but there wasn’t any intensity around it and I was keen to look left.

ET when I look left I see light, a town and some life but I don’t know if I should or shouldn’t go there...I'm okay

Tears fell down my cheek as in my image I could only see a bit of this "light and life" immediately on the left and that I wasn’t sure that it would continue, I just couldn't see. It was 9 out of 10 intensity, so I tapped:

ET Im not sure if the light and life will continue....I don’t have to go this way and I'm okay

I did this round twice.

2/10. Now, I just accepted what I could see in my image. I sensed behind me, in front of me and the left. It felt ok to look at those directions, so I then felt I could look right. I saw a long straight road. It was dark but right at the end, quite far into the distance was a glow of light. I continued tapping:

ET if I look right I see its dark to begin with but that in the distance there is some light...

I then started to cry because that light to me meant hope. 9/10.

ET when I look right, I see it's dark to begin with but that in the distance there is some light and hope...I'm okay

I did this round twice because I was still upset after one round.

ET left is light but uncertain and right is dark but there's hope and I don’t know which to take...I'm okay

I felt that the left was more appealing but then realising I had said the word "uncertain," I felt scared. The intensity was an 8 out of 10:

ET if I go left there is light and life but then a real uncertainty...I'm ok

I did one round of this (Setup and Sequence). I then repeated the statement using the reframe, "life can be uncertain and I want to try and accept that".

2/10. I felt that uncertainty was just a part of life. We can't be certain about a lot of things and that’s fine, we just have to take it as it happens. I asked does it feel ok to go left? I felt quite happy about the possibility of going left but felt a bit sad that it might not continue. Right? Not so appealing. 7/10 intensity:

ET it's not so appealing to go right, because it's dark to begin with but there is hope at the end...I'm okay

Almost straight away this came down to a 2/10 because the word "hope" felt really good now. I wanted to test again about how I felt about the four directions. I still had no idea which I would take, if at all any. I sensed that behind me and to the left and right felt ok but when I looked straight ahead I got very upset. 10/10:

ET it feels like something supernatural is going to make me go straight on and I really don’t want to...right here and now I'm safe and I'm okay

ET I feel that something out of my control is going to make me go straight on and I really don’t want to (Note: I felt angry now), right now I'm safe and I'm okay

This went all very quickly and I now felt really scared so,

ET I'm scared that I'm going to be made to go straight on, here and now I'm okay

An Event In My Past

ET this may have something to do with being made to do something in the past, I don't have to look at that now...and I'm now an adult (Note: This felt important to say) and I'm okay

I reviewed my original concern of feeling I have no choice about this particular person. I felt strength that there were now choices, though it wasn’t clear what they were. I didn't know what left and right meant, but that was okay, after all, we don't have to understand it in our heads for those energy shifts to happen. There was obviously a lot of intensity around going straight on and that is something I can follow up on with a fellow practitioner.

An interesting thing occurred the afternoon of the session when 'Z' arrived back home from shopping. The first thing he mentioned was that he had this trolley that kept on going to the left all the time (he physically demonstrated how he was trying to handle the trolley). He said he was really struggling with it and that it was such a nuisance (the fact that it just wanted to go left and he couldn't make it go straight on)...funny!

Melody Lovell is an EFT International Accredited Certified Advanced EFT Practitioner based in South-West France. She works with clients in person, over the phone and via Skype. She specialises in helping people with anxieties, stress, cravings, self-esteem, physical discomfort and emotional well-being. You can learn more about Melody by visiting her EFT International EFT Practitioner profile or online at MelodyLovell.com