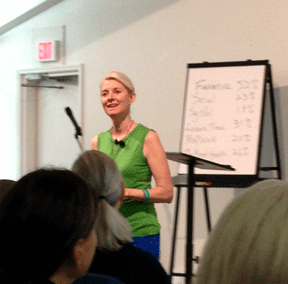 In December of 2009, EFT developer Gary Craig announced that he was closing down emofree.com, which had been one of the primary ways people could access EFT stories and experiences. In response, EFT colleagues (and EFT International EFT Trainers) Betty Moore-Hafter, Jade Barbee, Lynne Shaner, and Carna Zacharias-Miller (an EFT International Advanced EFT Practitioner), decided to create a free, online library of EFT resources for the EFT community.

The group of friends felt there was a need to continue to provide a platform where tapping enthusiasts could share what EFT has meant to them and how precisely they have used it to help themselves and others. Within several weeks of forming the idea, they launched EFTfree.net, which featured EFT articles.

In December of 2009, EFTfree published their first article The Core Principles of EFT. For the next 6 years (from early 2010 to 2016), EFTfree collected, edited and published EFT articles or "tapping stories" from EFT enthusiasts from around the world. The archive grew to 300+ articles, averaging one new article every week or so. Each article chronicled the personal and professional tapping stories of 100+ individual contributors.

Hundreds of unique visitors from every corner of the globe, from regions as far-flung as India, Chile, Zambia, Ukraine and New Zealand came to the website each month to read the articles. In 2011, Ange Dickson Finn, another EFT International Advanced EFT Practitioner, came aboard to help edit and maintain the growing archive.

Fast forward to May 2016, where diverse interests compelled the EFTfree editors to begin looking for a way to retire the blog and simultaneously carry forward the growing archive. It was at this moment that EFT International (with the help of EFTfree co-founder Jade Barbee) began developing a new website with a plan to include a way for members to share their personal and professional EFT stories.

Long story short, EFT International is proud to be able to offer the EFTfree articles a more permanent home and a commitment to both safeguard the existing archive and further grow a compendium of tapping stories and EFT experiences.

A Free Beginner's Guide to EFT

The origin tale of EFT International articles archive wouldn't be complete without mention of one important reason for the longevity of EFTfree: The EFTfree Manual. Sensing a vacuum for the availability of a comprehensive introductory manual for EFT, in February 2010, the group created the "EFTfree Manual" and offered it (via subscription) to visitors.

This 48-page free EFT manual was largely promoted "word of mouth" from trainers to students. Eventually it was picked up via google search under the keyword "free eft manual" and proved to be quite popular: As of this writing, it has been downloaded more than 17,000 times (at an average rate of 4 downloads per day) and counting.