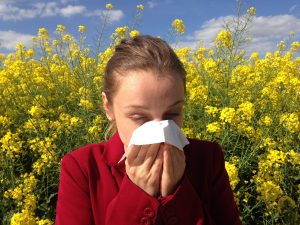 One of my favorite discoveries about EFT is its effectiveness in alleviating painful allergy symptoms.

Diagnosis of allergies and some interventions

A sensitivity test in a doctor’s office revealed I am allergic to a number of things.   These include pollen, birch trees, raw potatoes, and cats.  As a result, the doctor gave me a prescription for a pharmaceutical nasal spray. He told me to use it twice a day for the rest of my life, but I had misgivings. When I asked about the potential side effects of shooting a low-dose steroid into my skull for thirty years, he couldn’t give me an answer.

I found an alternative in the Neti pot, which turned out to be helpful but messy. It’s also difficult to carry around in a purse. I discovered that a commercially-prepared saline solution infused with grapefruit worked well too, only to panic when it ran out. Stinging nettle and other herbs provided relief, but they can be costly. And I came to the bottom of those jars all too quickly too.

Would EFT help my symptoms?

During an occasion when I ran out of my usual remedies, it dawned on me to try tapping to alleviate my symptoms.  These symptoms range from tingling above my left ear, the agonizing sensation of sprouting horns from the top of my head, and stabbing in my nostrils.

I kept things simple by tapping on the presenting symptoms. So:

Even though my allergies are back, and it feels like someone is jamming a screw driver into my left nostril, and two sharp horns are penetrating the top of my head, I deeply and completely love and accept myself.

Then I did a round of tapping, naming the various symptoms. By the end of the round, they often subsided, or traveled to another part of my face or head.  In which case I did another round to address any changes. Usually, by the end the second round, symptoms became much more bearable. In most cases, after a third round, they were eliminated altogether.

That really was all there was to it. Whenever my symptoms reappear, I tap and get similar results. I have been using EFT for many years, and its wonders never cease to amaze me.

Terry is an EFT International Accredited Practitioner based in Shelton, Connecticut. She specializes in helping people resolve cravings, relieve stress, and eliminate negative patterns in dating and relationships.