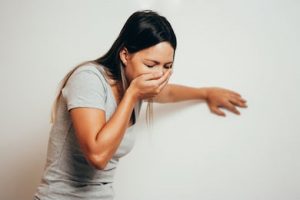 is defined as a phobia that causes overwhelming, intense anxiety pertaining to vomiting. This specific phobia can also include subcategories of what causes the anxiety.  Including a fear of vomiting in public, a fear of seeing vomit, a fear of watching the action of vomiting or fear of being nauseated.

Most people have never even heard of this phobia, but I am here to tell you that it is real because I suffered from it from the age of 10. Sometimes it can be debilitating, and EFT can help cure it as it did with one of my recent clients.

Carrie came to me this past March beside herself because her one year old had the stomach flu. She was afraid that her entire family would get it including her 11-week old baby. Carrie had been on medications and seen counsellors with no success. She was willing to try anything and had never heard of EFT.

Our sessions were held via Zoom. In my experience, all of my clients with emetophobia have a childhood memory that gave them this phobia, as I did.

To find relief and coping strategies and a possible cure for Carrie's long term emetophobia.

We started talking about Carrie's very first memory of what triggered her emetophobia. The episode happened when she was 13. Her entire school was closed because of an outbreak of the stomach flu. Her whole family had it and Carrie was the last one to get it. She could vividly recall the incident, and gave it a SUDS of 8. She remembers walking into the bathroom not thinking she was even sick, and then throwing up everywhere without warning. Recalling the episode also made her have sweaty palms and feel very scared that this could happen to her again without warning.

We did a few rounds of tapping on

Even though this happened and I still think about it till this day and it upsets me and scares me and my palms get sweaty; I deeply and completely love and accept myself.

After those rounds Carrie felt a SUDS of a 7 and she still felt very scared that it would happen again without warning.  She didn’t like that feeling and her palms were sweaty.

We tapped again on

Even though this feeling of not knowing when I could get sick scares me and I don’t like this feeling; I deeply and completely love and accept myself.

After those rounds Carrie was less anxious, but still felt uncomfortable around the possibility of actually getting sick from someone. She mentioned how she is anxious about going to bed every night, because anytime she’s ever been sick she’s woken up in the middle of the night and vomited. It’s really hard for her to go to sleep every night because her anxiety is so high. She gave that a SUDS of a 10.

This time, we tapped on

Even though I went to bed feeling fine when I was 13, I woke up and I was sick, and that scared me.  It scared me so much that I’m afraid to go to bed now because I might be sick; but I deeply and completely love and accept myself.

After those rounds she felt an energy buzzing in her head, and she felt as though the whole thing was silly. She then mentioned that she doesn’t eat dinner most nights because she doesn’t want anything in her stomach, in case she might get sick.

At that point we were nearing the end of the session. I asked her to rate her original memory of getting sick when she was 13. She said it seemed way less significant and gave it a SUDS of 4.

Even though, when I was 13, I got sick in the middle of the night and it still scares me, I’m choosing to not let this memory scare me anymore. I’m choosing to get a good nights sleep, and I deeply and completely love and accept myself.

After those rounds she felt great and loved the positive reinforcement statements. She had a SUDS of 0.

Carrie texted me the following morning and said she had the best night's sleep that she’d had in years and was so grateful!

Working through those past memories and moving into her current reality, raising two toddlers that will get sick at some point helped her come to terms with her fear.  Also to the realization that she didn’t need to be afraid anymore.

Carrie and I had five sessions in total. Here is the testimonial she wrote for my website after our third session.

EFT is MAGIC! Four weeks ago, I was really struggling with emetophobia. On the day I found Liz, my one-year-old son had woken up with the stomach flu. I was beside myself with fear; doing the typical rituals that would keep me "safe". I wouldn't eat or sleep, and my hands were raw from washing them so many times. At our first session, Liz made me feel so comfortable. She assured me my phobia was real, and helped me feel that I wasn't crazy for being so scared. She has taught me skills and actionable steps to help me fight my phobia and the anxiety that comes with it. Since starting EFT, I have felt at peace with my phobia. The safety I sought in restricting my diet and staying awake all night doesn't seem necessary anymore. I will forever be grateful for meeting Liz!

Although I am no longer coaching Carrie, she continues to keep me updated with her progress. In fact, she texted me just the other day saying her nephew threw up four times while she was with him and she felt totally desensitized as a result of the tapping.

I am so excited to continue to help people with this phobia in my new EFT practice.

Liz is an Accredited Practitioner.  She specialises in working with Anxiety, Physical Pain, and Phobia