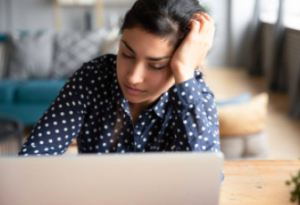 Editor's Note: The following was a client case study submitted during EFT certification – a starting point for discussion between Mentor and Practitioner-Candidate of how an EFT exploration unfolded.

Janice is a 38 year old woman who lives in Israel. She is married, currently works from home and is in the process of getting EFT certified. She’s unhappy with her career and is excited about making a change in her life and helping people through EFT. She is healthy but currently going through fertility treatment which has been quite stressful.

Janice came to the session wanting to work on procrastination. She has a goal of writing a book. This has been something stirring within her for years, but she struggles to take regular action. She’ll go through spurts where she works on it, but then gets extremely frustrated, feels stuck, isn’t sure how to move forward, and then feels paralyzed and does nothing.

During this beginning phase of our discussion I shared how I too feel writing a book is in my future, and how it has been a long work in progress as well. We chatted more about how she felt unorganized, how she’s tried different techniques, and how she will even set time aside to work on it, but then start cleaning or doing laundry, avoiding the project all together.

I started the session by asking her if she felt this procrastination anywhere in her body. She shared that she felt it as a fluttering in her chest and also identified the feeling as fear. We tapped on “Even though I feel this fear in my chest, I love and accept myself.” After one round, she said she didn’t think it was fear anymore, but the thoughts, “you can’t do this, who are you to do this” were replaying over and over in her mind. We tapped on those phrases and the feeling intensified. She described the fluttering as more prominent. And she then shared her feelings of doubt saying the phrase, “it’s not going to happen”, “this is the story of my life... I get an idea, I run with it... get stuck..and then stop.”  We did 2 rounds with these phrases and the fluttering sensation felt much less. She described it as going from an 8 to a 4.

Since she said this was a pattern in her life, I asked what her first memory of being caught in this loop was? She had an immediate response and vivid memory of being in elementary school, being diagnosed with a learning disability, and having feelings of not understanding why everything is so hard (referring to her school work).  We tapped through this memory of struggling in school  and afterward she had this new awareness of how when she would feel confused, or stuck she wouldn’t ever verbalize this to her teachers or parents, but instead  keep it to herself, beat herself up, and then give up and not try to understand.

We tapped on different memories she had of when she felt confused and different, and how the confusion undoubtedly led to not knowing what she should do and made her freeze.

There was a shift at this point and she went from feeling frustrated about getting stuck to feeling angry. She rated the anger at a 6. She was angry because she gets easily deterred. She was angry because she knows her mind works differently, and she was angry because she recognized that she was reinforcing her own doubts.  We then tapped on that anger for 2 rounds and it reduced to a 3. She could tell it was less because her neck and shoulders didn’t feel as tight. I asked her to check in with the fluttering feeling when thinking back to procrastination, and that was down to a 2. I asked her what she could do to stop reinforcing her doubts.  She said she needs to remind herself that it’s okay she does things differently. We did a few rounds of tapping on that. She went from being very emotional, to calm and saying “that’s just how it is.”

We wrapped this session up by doing a round of tapping and breathing, and she wanted to put everything in a small black box  and put it in her closet.

A few days after this first session I received a long email from Janice. She shared that she had a really rough couple of days. Janice and her husband found out that she wasn’t pregnant after their last fertilization treatment.  It meant that they were going to have to try a new procedure, and she was having a tough time with all of this news.  The day this happened her husband encouraged her to take the day off so they could spend it together. She did. She said that normally this would be a situation where she would take her feelings, retreat inward, and just freeze, just like how she freezes with writing the book. Because of our session she said she recognized this, and instead decided to share everything with her husband.  They had a big breakthrough in their relationship, because often her response of retreating inward would cause tension and arguments.  She shared how this behavior has been a pattern for, and she’s working to change it.  While they are still processing their grief, she didn’t feel stuck, but really felt like she was moving forward.

A week later we had our second session. We continued where we left off. She dove right in and got very detailed in explaining why she gets so overwhelmed and how it feels. She shared that when something is being explained to her, it’s almost like a walking bridge with missing wood planks. There are gaps in her understanding, just like there are in an old bridge. Certain information just slips through and she can’t retain it all. The panic and overwhelm set in because of this feeling of not knowing what she’s missing, as well as fear of being judged for not being able to pay attention.

We started by tapping on “Even though, I can only retain pieces of information at a time, I love and accept myself.” After checking in with how she felt after that round, she said she “just doesn’t know what to do about it.” We tapped on that.  She went from feeling confused to angry. She shared that she has a complex about the fact that she thinks differently. I asked her where she thought that complex came from.  She immediately thought of her father and the principal of her elementary school. We tapped on “Even though I think differently, I love and accept myself.” That led to tapping on “why wasn’t I embraced for being different.”

Getting to the Core

I asked Janice when she first felt ‘different’. She recalled being told by her parents that she needed to go to a psychologist. She remembered sitting on the swing in her back yard thinking to herself - what’s wrong with me? The appointments with the psychologist she remembered as being fun, but it was how her parents made her feel about having to go that left her with the feeling that something was wrong with her. She then shared how after seeing the psychologist, she also started working with a tutor for reading. When she didn’t understand the passages that she read, the tutor was telling her that she really needed to try, that she was going too fast, and to slow down.  Recounting this memory made her feel both sad and angry.

We did a round of tapping on “what’s wrong with me?” She said her inner self was yelling “NOTHING!” There was a lightness about her after that realization. We also did a few rounds on how her parents made her feel not good enough and as if something was wrong for having to go to the psychologist. Her anxiety about these thoughts went down from a 7 to a 3.

I asked her if she could go back and tell her younger self anything, what would she say. She responded “You are perfect just as you are.” We tapped on that phrase and Janice got emotional. She felt sad. I asked her if she felt that sadness in her body, and she said she felt it in her chest. We tapped on that feeling and was able to get it down from a 7 to a 3. She said she knew her parents had good intentions trying to help her, but really bad execution. We tapped on those words.“Even though my parents had good intentions, and bad execution, I love and accept myself.” This led her to sharing that she knows she’s unique and it’s totally fine. We did two rounds on that, and I could physically see the heaviness dissipate. The sadness was now down to a 1, and she said the images of sitting on the swing seemed more distant and blurry than at the beginning of the session; she felt calm and at peace.

We also wrapped this session with a round of just tapping and breathing. When I asked what kind of box she’d like to place it in, she said an envelope, and she wants to burn it.

After receiving Janice’s email following our first session, it confirmed my thoughts on her making an important cognitive shift. When she recognized that holding all of her thoughts/confusion/ frustration in wasn’t helping her, but in fact aiding in reinforcing her doubts, I knew we had hit on something that seemed pretty big. But when she shared that because of this realization she opened up to her husband, and in doing so they were able to help each other process their grief in a productive way, it gave me pause because this one session really helped her move through the pain/ fear and not be paralyzed which was her normal response.

This was compounded in our second session. When Janice said aloud that her mind works differently, and that’s okay, and not only could I intuitively tell a shift was happening, but by the end of the session she visibly was more relaxed and at peace with being ‘different’.

While this session started off with the presenting issue of procrastination with writing her book, it quickly went into her learning disability and feeling like she was different. Upon reflection, perhaps there were more questions I could’ve asked that would link back to moving through the procrastination with the book project. Like, “What can you do to make it happen?” Or “Do you get anything from staying in this loop of overwhelm and feeling paralyzed?”  In thinking back, I wonder if there’s also a fear of failure that is hidden away in all of this. If we have another session I will work to incorporate this line of thought/ questions.

Lauren Fonvielle is an Accredited Certified EFT Practitioner based in Delaware, US. You can visit her online at LaurenFonvielle.com