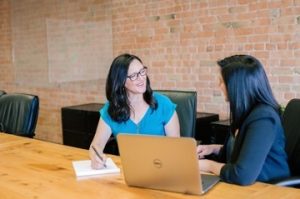 A lovely and intelligent woman, experiencing a very difficult and frustrating relationship with her direct supervisor, contacted me for support. During our work together we frequently tapped not only on her caustic, volatile and critical boss, but also on her conflicting emotions about her equally critical father who called her names and persistently criticized her body shape, size and eating habits. He also abandoned his eldest daughter and her younger siblings, leaving them with an emotionally unstable mother.

As a result of her early experiences with Dad (and Mom), she had a very difficult time speaking up for herself and establishing healthy boundaries, not only with her dad, but also with her husband and his family, and with her direct supervisor. It seemed that there was nothing she could do to please this woman who had unpredictable outbursts, frequently interrupted and talked over my client, snapped at her, and gave her instructions – later claiming that she hadn’t.

EFT results in change at work

Long story short, just when my client had finally recognized that she was a valuable employee who deserved better treatment, and was on the verge of resignation, ready to seek work elsewhere, her boss quit! Since then, the EFT recipient has remained in the same workplace and now has a far more compatible manager. She’s enjoying both the old and new projects she has been given, while receiving lots of appreciation for how well she is tackling them.

As a result of the support she received and the tapping we did together about her father’s abuse and abandonment, when her father died, she had come to a place of peace about him, along with a much more empowering understanding about herself. Recently she wrote to update me that:

"I feel like I am “coming alive” at work. I am getting a real appreciation in hindsight for how much I felt left out of the loop and how much that relationship was affecting me. Even though I didn’t need to leave in the end, I’m still glad I reached the decision that I would if my boss didn’t. I still remember that pivotal moment when we tapped on “I don’t want to work for ****** anymore!"

My new manager and I are working extremely well together and all shackles are off in terms of what type of work I can do. The only limitation really is how much I am willing to work. I am feeling safer and more confident every day and inspired by my work.”

The moral of this story is that continued suffering of past or present abusive behaviour is optional! Once emotionally charged memories have been released and reframed, it feels much safer to courageously, and successfully, stand up for yourself and achieve more of what you want and deserve.

Alice Grange is an EFT International Advanced Certified EFT Practitioner specializing in helping to empower disempowered women, particularly those who had a difficult relationship with their narcissistic, drug or alcohol dependent mothers.  Stay tuned for an online workshop on setting boundaries.