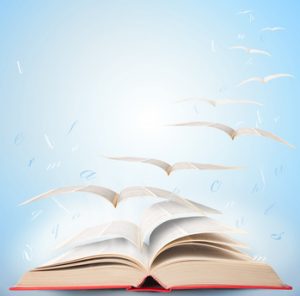 Fly with fantasy reading a book

We all know when we have the jitters - our stomachs feel unsettled, our palms sweat and our breathing speeds up. We are tense and it is impossible to relax. We are usually thinking about some event in the near future which has an uncertain outcome. We don’t know what’s going to happen, or if we will be able to face what happens, or if “they” will like us enough to give us the job, the part, the approval that we crave.

Why do we get the jitters anyway? Are they just part of being human? Well, yes and no. The only thing that can scare you is your thoughts. Sometimes thoughts come so quickly that we don’t even realize we are having them. But other times, we are painfully aware of each and every thought. And I say “painfully” because usually the thoughts that we find frightening are not supportive of us and our abilities.

I once worked with a writer I will call Cliff who was struggling to complete a screenplay. Someone at a well-known studio had expressed a lot of excitement about his project and was waiting to see the screenplay; however, Cliff found himself stuck in writing hell, day after day, staring at a blank piece of paper without having anything to write on it. When he came to see me on the recommendation of another client of mine, he was miserable but he didn’t know what was holding him back.

When we began tapping on his feeling of being stuck, the thoughts that floated through his head on a regular basis made themselves known. Without really being consciously aware of it, he was thinking thoughts such as, “I have no idea how to actually write this thing,” “This idea is wasted on me,” and “I am saving my reputation by not finishing this screenplay.”

Over the course of our work together, Cliff realized that what he thought was “stuckness” was actually paralysis caused by fear. Together we tapped on each limiting belief his mind came up with until he couldn’t think of any more. By the end of our first session, he was able to repeat each negative thought without feeling any sense of agreement with it. He also realized in our work together that many of these limiting thoughts were first spoken to him by various school teachers, who did not approve of his unorthodox (for middle school and high school) writing abilities.

At this point, Cliff was feeling encouraged about his screenplay, but we weren’t done yet. I asked him to come up with supportive beliefs that he felt would serve him better in his work. With encouragement, he came up with statements such as, “Writing on a daily basis allows my genius to shine through,” “I deserve success,” and “My persistence is what will make me successful.” In the beginning these statements felt overly bold to Cliff, but he was a good sport about giving my way a try since his way hadn’t worked so well!

After three EFT sessions, Cliff was able to start writing again, and several months later he sold his screenplay for a nice chunk of money. Yes, he was dazed and had a hard time believing his good fortune, but with this first success, he has found it much easier to write other screenplays because he now has solid physical proof that he can do it.

There was one other thing that Cliff and I discussed, which might have been the most important thing of all: No one has cornered the market on fear; we’re all scared. Fear in all its forms, from the jitters to outright terror, often seems to come with the territory of being human. The biggest problem with fear is that for some of us it represents a stop sign. The logic of the stop sign goes, “If I’m scared, there must be some danger here. I’d better rethink this.” All fear ever means for sure is that you are breaking out of your comfort zone. (It also proves you’re alive - once you are dead, you won’t have to worry about it again!) Certainly, do your due diligence and make sure you have protected yourself where you need to, but in our citified lives, usually, as the old saying goes, you should feel the fear and do it anyway. Sometimes it really is about keeping a stiff upper lip! Just know that keeping a stiff upper lip is a lot easier after you have addressed the hidden thoughts that are keeping the jitters going.

Here is the recap:

When you are scared:

1. Uncover the thoughts/beliefs that are causing the fear.

2. Use EFT to change the beliefs that are behind the thoughts.

3. Substitute those old limiting beliefs with new beliefs that support you and your abilities.

4. If you are still scared, and you are reasonably certain that you are not facing undue risk, see the fear as the growing pains that always accompany personal expansion. Then move forward anyway!

From the EFTfree Archives, which are now a part of EFT International .
Originally published on Sep 20, 2015.