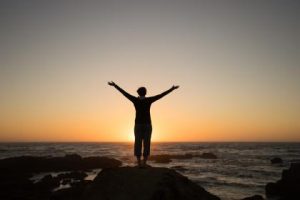 After a series of negative experiences or disappointments, anyone can become terrified to "move forward" with life. But the negative downward spiral can be self perpetuating as well when the steps taken are with free and repeat old patterns.

The way to move forward is to literally let go of the past hurts, beliefs and disappointments wherever they are without judgement. In other words thinking "I should have already been over this already" or "I already worked on this in therapy" or any other thought doesn't really work here.

The only question I think that is relevant is this: How do you actually feel when you think about both the past events that troubled you, and how do you feel about reaching your stated goals?

If you don't know the answer, the proof is always in the pudding right? What shows up in your life?

My client "Joan" came to me to lose weight, create her business and be in a fulfilling relationship in her life. In every area of her life she felt totally and utterly stuck and scared to do anything about it.

When we began tapping we realized there was this very powerful fear of moving forward in her life because she had a long list of things that had gone painfully wrong in her recent past in all of her relationships, leaving her wanting to not put herself "out there" in any way so as not to get hurt again. This has a tendency however to effect many people in many ways, not just in relationships but in finances and with health of course and she was no different.

Upon tapping for this fear we discovered the real roots to the problem: a childhood pattern she picked up watching her mother suffer with her father's neglect and abuse.

For faster tapping I ask the following questions about any presenting issue in someone's life (so we aren't just tapping on the re-growing leaves on the tree, but actually getting at the roots.)

1. What does this current problem remind you of?
2. When was the earliest time you can recall feeling this way, or the worst time?
3. Who, what, when or where is this symbolic of in any way?
4. Is there a downside or otherwise negative consequence to either getting what you say you want (ie: weight loss, a relationship, money)
5. Can you picture yourself without this current problem, and if so how does it feel?

Usually these questions can point to deeper concerns.

For "Joan" the issue of a downside was absolutely huge. She was terrified of getting into another relationship and getting hurt again and repeating her lifelong pattern of attracting men who "left" her in some way. This in turn was having her put weight right back on after losing it every single time. She would lose 5 pounds only to get terrified she was getting thin and start being attractive again and then what? She might get what she wanted, a new relationship and then lose it again.

She developed a massive fear of "moving forward" in her life because of this old childhood learned pattern.

When we released the old pattern from childhood, she began to lose weight without fear... and I'm sure soon will be attracting a healthy love relationship too. I'll keep you posted. 🙂

From the EFTfree Archives, which are now a part of EFT International .
Originally published on Jun 21, 2014.