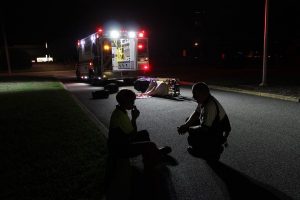 Memory is a construction.

We do not have a video recorder to store memories as faithful and accurate representations of what actually happened.  Every time we take a memory out of storage, we edit it in some way to make more sense in the light of where we are now.  What goes back into the filing cabinet is not what came out.

The key thing with traumatic memories is what metaphorical storage cabinet they go into.

is all we have to start with.  Things that happen to us as babies or toddlers leave a sensory trace in unconscious memory, but without a story attached.   Implicit memory does not cease to be open for business when a bit more brain is wired up. We have more sophisticated systems as well.

We keep adding to this implicit memory along the way.  It is where we keep automatic routines - like how to ride a bike. It links behaviours to memories – like how we survived some life threat.

That is a good thing when a replay of the survival response is because of an actual threat, and saves us when it is triggered again.  But here is the tricky bit.

Implicit memory (like how to ride a bike, or to hit the ground if there is a loud bang that could be an explosion nearby) is always experienced in the present tense.

So, something happens that triggers a memory.  It might be external. It might be internal – a body feeling, perhaps.  And we are unable to know in the moment that this is a memory and not actually happening now.

It makes sense of much of the way trauma continues to haunt us.  And it makes sense of why, no matter how long ago a trauma was experienced, it can still be running in the background of consciousness. Or, when something triggers a memory, in the foreground.

I will bet, if you administered a truth drug to the oldest of the veterans still with us, they could tell of vivid recollections of long ago things they do not talk about.  Scars they will take to their graves.

And some will still be experiencing responses triggered by something that reminds them of decades old trauma, but which they experience not as then but as now.   These may be externally visible behaviours.  Or an internal horror show.

So I was delighted to see results of some of the recent studies using EFT (Emotional Freedom Techniques) for Post-Traumatic Stress Disorder.  In one, the effect size was almost three.  In therapy outcome studies, one is considered good.  Three is considered awesome.

As EFT becomes more widely known and accepted, it offers hope for people still suffering from traumatic experiences in the past.

What a gift to humanity that is going to be.

Judy Byrne is an EFT Founding Master and a Trustee of EFT International.