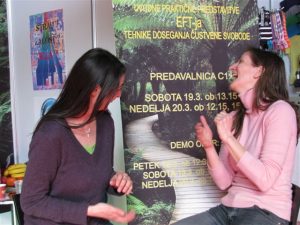 I was recently talking with a lady on the phone who was complaining that a man in the house she was staying in was "demon possessed" and trying to kill her with his psychic attacks. She related that over some months he was keeping her awake with his music and movement around the house and that her life had become hell. Interestingly she was unable to recall ever having had a simple conversation with him where she had requested that he be considerate of her. Her only response to that inquiry from me what that she must have told him and that her communications tended to be quiet and low key. She had no trouble though in recalling exploding with curses towards him and being generally hostile in his presence.

"I Surrogate Tapped for Her"

As she wasn't open or willing to embrace the idea of tapping, I just surrogate tapped for her through our conversation - mostly on the side of the hand for reversal. I figured if I could get her to even slightly acknowledge some responsibility there would be improvement.

I asked what she wanted from this individual and her answer was along the lines of wanting him to be appreciative (of having been given a house to stay in). She was somewhat willing to address how she hadn't appreciated him. Turned out she would lie in bed foregoing using the bathroom if he was near and wishing that he didn't exist. Basically wishing he was dead.

When I asked her how what she was doing to him was any different than what she was accusing him of - there was a very long pause down the phone line that went on forever and then she changed the subject. We don't like to give up our stories that easily. What she saw and partially admitted to seems to have resolved the situation somewhat even if she couldn't bring herself to fully own it. Some responsibility is better than none. Less painful anyway.

Reminded me of a time I was swapping sessions with another practitioner and that night waking up with her screaming psychically in my face. I wanted her recognition of what a great practitioner I was, but I was unwilling to accord that to her or myself. After seeing that, there were no further attacks.

Another time was with a man I was also swapping sessions with. He was more sophisticated and would attack through a dream state and I'd wake in horror yelling his name. Once I saw that I was wanting him to look after me so I wouldn't have to do it myself he is unable to touch me though the potentiality still exists whenever I have dealings with him. It can only be actualized though if I become irresponsible.

It is reported that the Buddha was attacked by demons in the forms of seductive females before he reached enlightenment. I wonder if he had unacknowledged wants in him at that time.

I have yet to see a case in my practice where a client is having a problem with another where there was not an unacknowledged want. The unmet wants lead to judgement, which leads to attack. When we attack another we attack ourselves. It appears we live in a world of separate identities and dualities. In essence there is nothing out there that can hurt us. Something seems to happen externally. Are we hurt by what happened or by what we tell ourselves about it. We project our disowned shadow side onto the other and then tell ourselves that they are doing it to us.

For example, if I don't respect myself and hate myself for that and don't own what I'm doing, it becomes too much to hold inside and I will project it onto you and my mind will show me all the "evidence" as to how you're not respecting me. This becomes an incredibly painful story that I call my identity, and the people I call my friends are those who agree with it.

Radical self honesty about our expectations, judgements and attacks frees us from our stories. In my experience, the judicious use of muscle testing will always reveal quickly what the truth is if you can be neutral enough to hear it.

When you remove the clouds the sun is found to be always shining.

From the EFTfree Archives, which are now a part of EFT International .
Originally published on November 13, 2011.