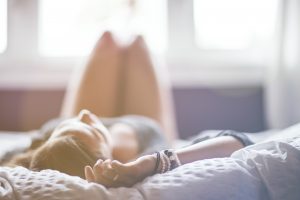 Belinda, a woman in her middle years, recently learned that she has breast cancer. She switched to a raw foods diet and immediately started losing weight. She also started seeing different therapists. I explained to her that EFT could help her clear any conflicts that she was having, including any blocks she has to healing. Though Belinda lives close enough that we could have done a session in person, we decided to do a phone session to save time.

The way that I like doing EFT is to get to the biggest underlying issue, and for Belinda her biggest conflict centered around spending so much time taking care of her elderly parents that she hadn’t allowed time to take care of herself. The intensity of the conflict was a 10, and when I asked her where it was located in her body, she replied that it felt the most intense in her throat and third eye. Then she noticed that it had become entangled in all of her chakras.

When we did up the Setup phrases we included statements such as:

Even though there is a part of me that doesn’t think this is going to work, I love and accept myself...

Even though I doubt that this will work...

Even though it’s a juggling act with a few too many balls in the air...

Even though I haven’t been taking care of myself...

During the first round, we used “It’s a juggling act” as her reminder phrase. I could hear her laughing when she repeated, “It’s a juggling act.” After each round of tapping I asked about the intensity level in her chakras, reminding her that it had been a 10 when we started. At the end of the first round, the intensity dropped from a 10 to an 8. We talked a little more, and it seemed that it might have continued to drop, so I repeated my question. It had dropped to a 6.

To determine what her “sweet spots” were, I asked which of the points that she had tapped on felt particularly good. She came up with four points that stood out for her (her collar bone, side of the eye, above the lip and the top of the head). I told her that in the future, when feeling any anxiety or frustration, she could tap or press on her sweet spots for instant relief.

The next round of tapping brought the intensity down to a 4. I could hear her yawning over the phone. I reminded her that yawning is a release. She said that she was feeling more relaxed as she tapped.

On the third round, she tapped on all the responsibilities that she had with her parents, and how she had forgotten about herself. She also shared how she hadn’t taken care of herself, and that she would eat a carton of Häagen-Dazs ice cream for dinner. One of her set-up phrases was, “Even though I used to eat a carton of Häagen-Dazs for dinner, I love and accept myself.” At one point as we were tapping, Belinda blurted out, “I’m important!” and so we finished the round with her tapping on “I’m important!” Her intensity dropped to a 2.

Belinda shared with me how she was getting other people involved with all of the jobs that she had been doing for her folks. She was going to continue to lessen her load and begin shifting her focus to taking good care of herself.

With her final round of tapping, we didn’t use any Setup phrases (because the intensity was less than 3). We started with, “I am important!” I encouraged her to come up with her own affirmations as we tapped. The affirmations included:

I am important
I remember I am important
I take good care of myself
I count
I make time for fun (she really liked this one)
The cancer is dissolving as we speak
We have fun at my Titty Party [note: She had told me she was going to have a breast party.] I am healthy
I am whole and complete

Belinda was really laughing after this last round. Her intensity dropped down to 0. She said that she was feeling really relaxed. I asked if she was familiar with Louise Hay’s work, and she said she had several of her books. I shared an affirmation that Louise uses for breast problems.

Caregivers have to remember to take good care of themselves or they can end up getting sick themselves. It truly is a balancing act to take care of oneself and to take care of parents. Belinda is learning how balance her own life with her obligations of taking care of her parents. Now she has EFT as a tool with which to help herself.

From the EFTfree Archives, which are now a part of EFT International .
Originally published on December 31, 2011.