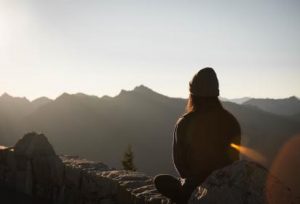 Back in 2009, I found my friend Melissa struggling with many chronic ailments. We had been out of touch for some time, and when we reconnected, I was shocked that my once vibrant and active friend had literally found herself too weak to leave the house most days. Fortunately for her, she did have a "healing team" consisting of several medical doctors, a reiki practitioner and now - me.

During our preliminary talk, Melissa shared that a reiki healing experience had given her an energetic kickstart towards possibly getting her life back. However, while she believed receiving reiki had been crucial in helping her, she also confided that the visualization offered during this work had involved “too much pushing” and did not necessarily honor her needs.

Two years before, Melissa had lost her little sister to a drug overdose. Coming to terms with this loss still seemed overwhelming to her. She knew the grief and loss was affecting her health and so much about her life, but she did not think she could ever come to terms with it or move beyond it, much less make peace with the enormity of it. We spoke about how using EFT together with a gentle visual journey - Inner Theater, could potentially help change the way her grief might be affecting her - in a way that would honor her needs completely.

We began our session with EFT on just her physical symptoms and her feelings about them. What came up almost immediately was the enormous amount of fear she carried around being "well." She brought up the clear realization that there was a part of her that was extremely resistant – terrified of being well – just as much as there was a part that was so ready to be healed. “Who would I be? I have never not been struggling against something!” While we worked with this fear somewhat - it did not subside, and I could sense there was a need to get her out of her head.

Sensing that a visual, guided approach would help us sneak up on the problem more, I offered her the possibility of going into her own sacred inner space. When introducing this process, I will usually offer a road, a door - a gateway to a safe personal space where an inner story can unfold. In Melissa's case, I offered her a peaceful journey down a road of some kind. She liked this immediately, and we talked about the perfect weather for such a trip. She settled on fall with yellows leaves filling the road and gently falling from the trees.

At the beginning of the scene she immediately found herself driving comfortably along her peaceful road until, quite by her own guidance, she stopped some distance from a gigantic tree. Since this was an “in-person” session and she had indicated that tapping was physically uncomfortable for her, I gently squeezed her fingertips while she told me what she was feeling and what she was seeing. She indicated that the tree felt safe and comforting – so much so that she actually wanted to hug it. She offered that it reminded her of her father or father figure, so safe and warm and deeply rooted under her. She then expressed sadness that she had never felt that safety and security herself - she felt as if she was floating above the roots.

As we moved along, I asked again about that fear of getting well. She immediately said it was like a huge concrete wall. She expressed that she could indeed see it, but that it terrified her, even though it was some distance away to her left. She felt she could not safely approach it, much less climb it. I told her she could do whatever she liked in the space, including sit in the comfort of the tree as long as she needed. She expressed extraordinary gratitude about being able to honor this boundary for herself – to honor her own time and her own needs.

Sitting against the tree, she talked (as I tapped) through some of her feelings of fear. At this point, her sister, Morgan, entered her mind. I asked if she would like her sister to potentially join her somehow in the scene. Without prompting from me, she said, “She’s here,” and indicated that her sister was approaching the vicinity of the tree. The relief and disbelief in her voice was palpable and we spent some time tapping through both what she was seeing with her minds eye and feeling as her sister approached and sat down next to her.

For a moment, Melissa was confused that her sister could look so healthy and refreshed and different than the young, troubled woman she had last known. However, we tapped together on this as well until her feelings stabilized and she was moving on to describing the interaction. Two aspects stand out for me about this part. Firstly, Melissa was momentarily confused about what face to put on her sister, since her face was not in full view. I offered that maybe her face was not visible to her for a reason and to just focus upon the physical parts of her sister she could easily see.

Immediately Melissa's voice relaxed and she indicated that her focus was falling comfortably onto Morgan’s knee. As we tapped on this visual, Melissa was able to look a bit higher and rest her gaze on her sister’s thigh. Sensing this was going to be a journey in itself and we were nearing the end of our time together, I thought that this was a good time to again ask about how she felt about the interaction [Note: this “what are you seeing / what are you feeling” back-and-forth is very common in an Inner Theater session.] She indicated that she wanted to express anger towards her sister for leaving, and that there was much more to say. She also indicated that it “felt so good and right” to be there with her sister and that Morgan had agreed to stay and/or return as long as Melissa needed to talk. Needless to say, this was an enormous sense of comfort to Melissa.

For a moment, Melissa indicated that scene had abruptly changed to her watching both she and her sister entertain the possibility of climbing the wall together. While she still felt fearful and “not ready”, this moment represented a real awakening to the possibilities of this healing interaction with Morgan.

As the session drew to a close, I offered that Melissa could return to this moment on her own at any time. I also offered that she could take the whole scene into her heart and know that she carried it with her always. We spent some time coming out of the session, processing what was happening, until Melissa felt both connected to her sacred space and completely ready come back to physical reality.

While still needing to take sleeping medication, Melissa reports that she is more upbeat and pain-free in her waking hours since our session. She has since reorganized her office (a feat near-impossible previously). She reports that she feels enormous peace around the passing of her sister, and comfort that what transpired was real and truly life-changing process for her.

[Since our session] I've been able to envision my own life - untethered from Morgan. Maybe there's less guilt, maybe that I was unconscious of before - I've been able to focus on me with an energy and a fervor for life - there is definitely more peace. There's a shift there for sure.

During acupuncture, I chose to "go there" to my sacred space - to the tree. It was pretty cool. I liked that I controlled it. We did more work together. She said 'I'll go over it with you.' I could again visualize us going up over the wall. It was beautiful, bucolic, green pastured world. She said, 'I'll be with you the whole way. If you want to sit under the tree, I'm here.' The vision gave me a place to visit her - a beautiful, tangible and accessible place. Very real. This vision has an integrity. It has a life of it’s own.

Melissa and I hadn't had a chance to visit in almost two years. Because we are friends, I did know she was still going through tough times, but in early 2010, her physical condition unfortunately took a turn for the worse. Mel eventually found herself face-to-face with what she described as a spiritual decision: Get well - or give up. According to her, she knew she had to do everything she could to see herself well.

Back in the Inner Theater

Slowly, but surely, Melissa did begin to believe that living and healing was something she could - and would do. And while attending a workshop at the Omega Institute, during a guided meditation, she found herself back in her own sacred space - beneath the wall and in the full presence of her sister. This time, she was fully ready to speak face-to-face with Morgan, and together they ran, laughed and reconnected more fully than ever before.

It was fabulous to hear Melissa recount her experience and stand empowered and healthy again. Not only are inner visuals a great EFT tool for sneaking up on something big, but they can be highly meaningful and connective too.

From the EFTfree Archives, which are now a part of EFT International .
Originally published on October 29, 2011.