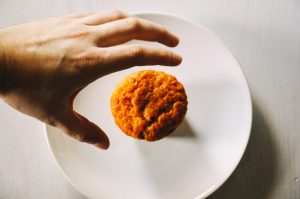 In a recent Level 1-2 training, the group really loved the demo we did with chocolate cravings. They asked me to write up the guidelines for them and I realized that I do have a protocol I follow, more or less. This may be an oldie-but-goodie for many people, but it's been refined through the years and really works well.

Tapping for Chocolate Cravings: Protocol for a Group Demo

This is a really fun and impressive demonstration of the power of tapping. It has never failed me. Here are my guidelines for a tried and true chocolate cravings group demo.

1. Buy a bag of Hersey’s Kisses, the traditional milk-chocolate with nothing else in them. (Note: the demo works best with low-quality chocolate. My theory is that really nice dark chocolate actually has benefits for the body, so the tapping will not release the craving as thoroughly. I once tried Hersey's Kisses with Almonds and cravings didn't drop as quickly -- people said they were really seeing the almond after tapping -- the one nutritional part of the candy!)

2. To start the demo, tell the group you’d like to see who is interested in what you are going to pass around - then open the bag and either pass around the bag or pour the kisses into a bowl and pass it around. Ask everyone to smell the bag or bowl -- ahhh! -- and take just one.

3. Ask if anyone has gotten a chocolate craving from seeing and smelling the whole bunch of Hersey’s kisses. Get them to slightly unwrap their kiss and smell it. What numbers (0-10) are the cravings? (Usually a few will be off the scale, like 20+!) See if anyone has their mouth watering.

4. If anyone has no craving, they can just tap along to support the group. Or they can think of something they do crave. But you’re going to be leading for chocolate cravings.

5. Reassure people that tapping for chocolate will not turn them against chocolate. What it may do is give them the freedom to choose. Instead of chocolate having power over them, they may reach a place of more peace with it where they can choose to have it or not. “But we don’t know what the results will be for any individual. Let’s just experiment and see what happens.”

6. Lead a round of tapping:

“Okay, now smell it again. Has anything changed? Did anyone’s number change? It’s just one round of tapping, we may not get a result yet.” (It’s best to downplay it. However, usually some people already notice a change -- it doesn’t smell as strong, or not as appetizing, or their mouth is no longer watering.)

7. Lead another round of tapping:

“Okay, now smell it again. What do you notice? How strong is your craving (where is your number) now?”

“Is there anybody who is finding no change, or even that your craving has gone higher?”

8. If so, tell them that is a good sign -- they’re really tuning in to what chocolate does to them.
And ask if they’d be willing to try an experiment. “We’ll find out more about what chocolate means to you personally, and then the group will tap for that and we’ll see what happens. And even though we’re focusing on one person, a lot of people may get borrowing benefits. This can be really interesting and also serve the group. Are you okay with it?”

Hopefully they agree. If not, of course, we drop it. “That’s okay. Anybody else want to talk about what chocolate means to them?”

9. When you zero in on one person, here are some good questions to ask. Do separate rounds of tapping for whatever they tell you.

So you may be tapping for things like this:

Even though I look forward to that creamy taste and how it makes me feel happy...

Even though it’s my reward because I’ve worked hard and I deserve it...

Even though it reminds me of Aunt Bea who gave me candy as a kid...

10. See what happens! When you get to what the chocolate means, the craving will often shift profoundly. But if not, just say, “People are complex and this could have some deep roots that we can’t get to in a demo. But see how you feel tomorrow! Sometimes, there’s a delayed result. And what about everyone else? What came up for you?”

I sometimes explain that when we see/smell chocolate, we have a huge response based on how we’re wired up mentally and emotionally. There’s the “mind hunger” -- we think it’s going to taste so great and be so satisfying -- that’s programming from the past. There’s the “emotional hunger” -- anticipating that we’re going to get certain feelings, like warm fuzzies, from the chocolate, again the programming from past associations. It’s like we go into trance around chocolate! But when tapping clears some of that, we really smell what is there, and it’s not so great. Chemicals, tinfoil, too sweet, not so appetizing. Candy companies certainly know about the emotional hunger - Hersey’s kisses and hugs, Dove chocolates with a little love note in the wrapper, Valentine’s chocolates in a heart-shaped box!

In this last group of 10, everyone who had a craving noticed a big change. The two people who did discuss what chocolate meant to them, and we tapped for them as described, have been in touch since to tell me that they can't believe the difference. They are really free from major chocolate cravings, shall we say addiction. And one of these people had said as we started, "if anybody gets rid of their craving and doesn't want their chocolate anymore, you can pass it to me." But at the end of the demo, she had no interest in eating chocolate. This really gets people's attention! It's a great demo to introduce people to the power of EFT.

Betty Moore-Hafter, www.CreativeEFT.com, is an EFT International Accredited Certified EFT Master Trainer of Trainers and Advanced Practitioner offering EFT Level 1-2 and Level 3 Trainings several times a year. She also offers a special EFT mentoring and support program for EFT International EFT certification at www.EmotionalFreedomMastery.com. Betty does EFT sessions by phone and by Skype, as well as in person at her Burlington, Vermont office. You can find out more on both websites and pick up free gifts on each site.

From the EFTfree Archives, which are now a part of EFT International .
Originally published on Nov 16, 2014.