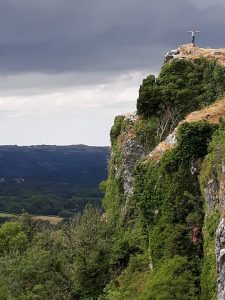 We all know what it feels like to have fear

A holding of breath, a pounding heart, sweating, a racing pulse, trembling or feeling frozen stiff. A panic about not being able to escape...that feeling of DANGER to your life.

Why is the fear there?

That fear is there for a reason. It is in fact essential in that its function is to assure survival. When faced with danger, or the threat of danger, our bodies go through several physical reactions to prepare us to respond and to keep us alive. Increased blood flow to the extremities of the body is there for us to flee as quickly as we can, and muscles tighten in order to fight back.
But why is it that some of us will have these intense physical sensations of fear when presented with a situation that, in the eyes of others, would not actually cause any real danger? A general house spider, for example, does not pose a real threat to our survival. Many people dislike spiders, but a person with arachnophobia will go to great lengths to ensure that they are not exposed to them.

What is a phobia?

A phobia is described as an extreme or irrational fear of or aversion to something. The impact the phobia has on their lives can be horrendous, especially if it is a fear that is not easy to avoid. Their bodies are in threat mode all the time whether they are exposed to the fear or not.  Just the thought of it brings on the physical and mental suffering.

What is it caused by?

A phobia can be caused by a traumatic experience.  Either one specific event, or exposure to several very unpleasant events. The traumatic experience, however, may not be remembered by the person with the phobia, especially if it occurred in early childhood. In fact, the traumatic event may not have even happened directly to that person. Instead, it could have happened to their mother, father, grandmother, grandfather, or  perhaps even further down the family line.

The newest research in epigenetics tells us that the effects of trauma can pass from one generation to the next. This can be known as inherited family trauma. Great-grandparents living in a war-torn country; a grandmother who was continually locked in a tiny room as punishment; or a father whose brother died in a car accident. Memories in the body are passed down to the next generation, which can lead to intense body sensations when triggered by something resembling the original trauma. So you could well be carrying with you the emotional baggage that doesn’t actually belong to you!
The work done by Mark Wolynn, author of "It didn’t start with you" is a fascinating read, if you want to look further into this concept.
​
Learning about the origin of the initial trauma can be healing in itself. Understanding what it must have been like for family members and how this affected others, and now yourself, can bring an element of peace. Often though, stories of previous events are not always clear.  Perhaps an event took place that was then never ever talked about (due to its severity and incomprehensibility)? Or there are just mere fragments of memories or images left?

How can EFT help?

EFT is an effective tool to enable the releasing of these deep rooted fears. In a session of EFT, we may come across the original trauma.  A forgotten memory or image from early childhood may appear, and we can tap on the event itself. However, it is not necessary to unravel the past, digging up deep wounds and reliving the bad experience. This can also be highly dangerous for the client. One of the core principles of EFT for a practitioner is "not going where you don't belong". EFT can be applied gently, and we can work directly on the sensations in the body that occur in the here and now.
When the fear is triggered by an image, thought, sight, sound, smell, touch, or memory, the body sensations are intensified. This is when the emotional part of the brain is on overdrive, and we prepare to fight, flee or freeze. When we gently tap on acupressure points, we send signals to the amygdala in the brain, which begins to calm the system down. With arousal levels dropped, the rational part of the brain takes over. It can start to make sense as to what is happening in the present moment and will say:

Oh, I’m not really in any actual danger

A 'light bulb' moment for many, giving a powerful sense of liberation.

Sarah suffered from a fear of spiders.  Without any of those old terrifying sensations, she literally left the computer screen in the middle of our second Skype session, went to her garage, and searched for spiders . No hesitation, she just went. She looked behind bins, lifted jars and even looked into the large sink (where there was bound to be a spider) but, to the disappointment of us both, there were no spiders to be seen! We did not discover a cause of Sarah's fear.  However, we tapped on all the physical sensations she experienced when she had encountered spiders in the past (by doing the movie technique), or when imagining what it would be like to see a spider. The threat of the spider had left her body and, although she still does not like spiders, she can tolerate them in her house.

I no longer feel that creepy tingling when I meet a spider, nor do I go running around shouting for someone to come and remove it.

had a great fear of dogs, and it prevented her from playing in the park. Her SUDS score was 8/10 for her fear. When I asked if she had always been afraid of dogs, she said 'No'.  Apparently it was only after an event in the park about a year ago, when a dog shredded up her beloved ball. Here we had a specific incident.  We tapped as she described the 'sharp teeth'; 'it came out of no-where'; 'I wasn't expecting it'; 'it just shredded my ball'.
This work appeared to release a fair bit of fear, but Sally still was very unsure about dogs. We then tapped on a soft toy cat named Meow, that also had a fear of dogs (the technique known as surrogate tapping).  Sally wanted to tell Meow how she can be safe. That dogs can be fun, and that she would help protect her. We had just one session, but I also had a session with her mum. Sally's mum, though not really aware of it, was experiencing a fair bit of anxiety in regards to her daughter's fear. By helping mum with EFT, we were also helping the daughter. Sally was soon able to go to the park and enjoy playing with her friends.  She was also able to see the fun that dogs had when playing.

Anne is pictured above standing on a rock almost 400 feet high.  Before I met her, Anne would avoid heights all together. She would go on walks with the family, but could not climb higher than a certain height. After one session, she could look up at heights without that same dizzy feeling. After her second session, she could climb a step ladder without any sensations of fear.  After her last session, she had a great desire to finally face her fear head on, and follow her family’s footprints to a height I think many thought inconceivable:

As I stood there, I felt amazing. What an achievement. What a sense of freedom. Something I had been scared of for so long seemed so insignificant now. All I could think about was how beautiful it looked from up there, and how much I could see. The saying “As far as the eye can see” really had meaning now. I felt so alive and so very proud of myself!....Melody made it possible for me to face my fear, confront it head on and then conquer my fear.

To witness these ladies, and many others, heal their own wounds (myself included) through this gentle process touches me deeply and sincerely. It gives hope to others that fears do not have to stay embedded in the body. Emotional inherited baggage can end here....and forever hold its peace! Now what would that feel like?
Go to top
Melody Lovell
Melody is a certified and accredited EFT Practitioner currently training towards Advanced Level. She offers EFT sessions via Skype and works with those who have fears, anxieties, bad habits, cravings and self-esteem issues.
​