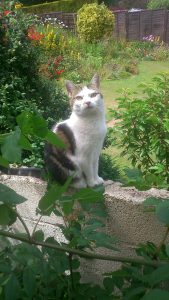 Over 10 years ago, my cat and I shared an experience that would both change our relationship with one another and cause an epiphany that would radically impact my understanding of trauma.

Drumstick had been living with my mum since I left home but unfortunately the time had come to move mum into care. Now we all know that cats don’t very much like change so when everything was uprooted, the house was sold and she came to live with me and my husband’s 2 dogs it’s fair to say she wasn’t a happy kitty!

Before the move, Drumstick had always been a frightened cat. She was rescued from a family with a gaggle of children! When I collected her she limped and never seemed to get mums milk as she was the runt of the litter. For years after she always seemed very wary. She would sit beside you but never on your lap. Always needing to maintain control.

This giant upheaval into our busy, loud house was an extremely hard time for her. So I did what any sane therapist would do who loved her cat and didn’t know how else to make her feel safe… I followed Gary Craig’s advice to “tap on anything”. And given the miracle of what followed, I’m so glad I did!

With Drumstick at the far end of the bed and me sat at the top end I started surrogate tapping:

“even though I’m facing the wall and curling myself into a tight little ball, I’m such a lovely cat”

“even though I don’t know why I’m here. I was happy at home and now everything is different and scary, I’m doing a really good job”

I noticed her breathing become slightly deeper and a shuffling of position which looked more relaxed.

So I tapped on:

“even though it’s ok for me to breathe a bit more now, I’m still not going to be totally comfy because I don’t like it here, I’m a good cat and I know how I feel”

“even though Heather is behind me doing something weird I’m not going to turn around because I just want to be on my own and look at the wall, I’m still a bit intrigued”

As I was doing this she started to look back at me and her eyes had focus for the first time. So I carried on:

“even though I don’t really know if I want to turn around or not, I’m a clever cat and can make up my own mind”

After this slowly she crept up the bed about half way and laid down on her little white paws eyeing me with intrigue and suspicion!

So I continued surrogate tapping in the same fashion. Using my language to mirror what I could see in her posture, eyes, breathing etc plus intuiting her thoughts and beliefs. So we got to the point where she was sat right next to me but not on me.

I tapped on “even though it feels so nice to be close because not I’m not on my own scared anymore, I still don’t think I could ever get on Heathers lap because that would feel sooooo scary I’m still a good cat and whatever I choose is ok”

“even though I don’t know what it feels like to cuddle and a part of me really wants to find out, I can’t take all my legs off the floor in case I get hurt. I’ve been hurt before and I don’t ever want to feel that way again”

Then something amazing happened!

I started to see memories flash through my mind – apart from they weren’t my memories! They were Drumsticks!

I could see her being played with by the children. They were throwing her through the air and playing catch with her. Sometimes they would drop her and I knew that was where her limp came from. I was so taken aback to be seeing her memories, the air changed and crackled around us. I was suddenly aware that something very special was happening.

Drumstick was very still and I gently tapped through the trauma using language like I’m safe now, it’s over.

Then I watched my cat as she violently shook for about a minute.

I was shocked. My first thought was “oh no I’ve broken my cat!”. I hadn’t encountered this before and didn’t have a clue what was happening.

Once this phenomenon had subsided, Drumstick immediately jumped onto my lap with no hesitation – we’re talking all 4 paws off the bed at the same time kind of leap. She then put her two front paws onto my chest and stared at me in the eyes.

I swear to you it’s like she was saying thank you. I had goose bumps and tears in my eyes. It was a truly magical moment. As she looked into my eyes she put one paw on my cheek and held it there. She has never done this before or since.

After this timeless moment she then leapt down off the bed, went straight to the dog’s big bowl of water and lapped it up like she had been in a draught! I was mesmerised as her little ears stuck out over this giant bowl as she guzzled! Not only because she was going near something that smelled of dog but also that she instinctively knew she needed to hydrate after such a profound energy shift.

The results of that hour long session stayed with her for the rest of her life. She relaxed around the dogs, sat on laps and was generally more affectionate and at peace in herself.

Since this time I have encountered this discharge shaking many times as I now specialise in working with Trauma and Childhood Sexual Abuse. So often when we release the trauma at the root and when the client understands that the event is OVER now and they are SAFE, they do what wild animals do and literally discharge the freeze response and restore harmony to their body. The event is no longer stored as a trauma and therefore the client can’t be triggered back into it. Instead of the event being stored as “still open”, it is filed “closed” and is archived appropriately.

I have so much to thank Drumstick for. That little scared fluff ball had no idea how much she would impact me and my understanding of Trauma and all the clients she would help.