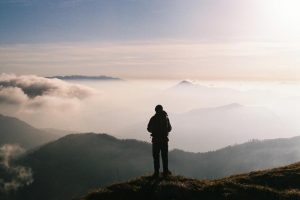 I’d like to share the story of a session using parts work with a client of mine, "Dave".

Dave is in his mid-50s. He founded and owns a highly successful business in a creative industry. He’s in long-term recovery (“long-term recovery” is being clean and sober for many years) from drug addiction, and works his program with great dedication. He does spiritual group work, adores yoga, and has been tapping with me regularly since 2012.

At the beginning of this particular session, he told me he had been in a pretty good spot, enjoying life and work, for about a month. He had been handling the ups and downs he encountered without feeling knocked out of his serenity. He reported this was an unusual stretch of emotional balance for him, and he felt very happy about it.

This was a big step forward because we have worked on helping Dave feel calm and resilient in his mind and body in the present moment, weathering the challenges of life without feeling like he wanted to escape or use something to feel better.

In previous sessions we’d worked on the desire to pop a pill (even just an over the counter painkiller) to feel better, whether emotionally or physically. Although Dave stays clean and sober, in our sessions he’s very up front about it when he has cravings for the opioids he used to use. This is not at all uncommon and I’ve heard other people in recovery talk about how they still have emotional attachments to the physical actions and rituals of using.

On this day, Dave wanted to work on troublesome physical problems, especially a shoulder injury.

The shoulder problem was, of course, more complex than just a shoulder injury. In our session the month previous, Dave had talked about how part of him was kind of hoping he’d need surgery so he’d have a reason to take what he refers to wryly as a “Vicodin holiday”—an unassailable reason to use opioid painkillers because he’d be legitimately in pain, and could therefore feel he was not violating his recovery from drug abuse.

Between our previous and current sessions, however, Dave had been told by the doctor that he didn’t have to have surgery.

Only problem: he no longer had an excuse for the Vicodin holiday. And the fact that he wanted one was troubling to him.

I chose to work with the part of Dave that wanted a Vicodin holiday, rather than follow the trail back on the shoulder pain and injury, because I was intrigued that Dave had just told me about having a month of emotional balance juxtaposed with part of him craving a “legitimate” reason to use drugs. I felt that juxtaposition might have some information for us.

That was where we focused our work for the day, and we ended up with a lovely and elegant “parts work” session.

We started with some tapping about Dave’s feeling of being, as he put it, “that guy”—the part of him he refers to as Stoner Dave, the part who is tempted to use even when there is no immediate emotional upheaval. He felt a feeling of shame as tightness in his chest, and we used those phrases in our tapping.

After we brought these physical sensations down I asked him to check in with Stoner Dave. I asked, “How much of what was weighing Stoner Dave down, and causing him to use, is currently weighing you down?”

With a look of bemusement, he answered “Very little of it.”

And I continued, “How much of the feeling of normalcy he was seeking, have you been experiencing over the past month?”

“Almost all of it,” was Dave’s answer. This felt like a big recognition to him, that he was currently living in the emotional state that he had spent many years of drug use trying to achieve.

I tested a little further. “So you’re telling me you’ve been feeling this way even without having used anything at all to change your mood?”

In the spirit of one who is dedicated to his recovery and to holding himself accountable, he said he had taken some OTC painkillers in the past month. Most of us would not feel that taking Tylenol needed mentioning, but to Dave it was important to be utterly honest.

So I asked him to invite another part into the conversation: the part he calls Sober Dave. Sober Dave is the one who holds Dave accountable to being up front about taking an OTC tablet. Sober Dave is the mature, responsible part of Dave who works his recovery and helps others on the path as well.

Once we evoked these parts, I had him do an exercise that I’ve found very useful in helping people detach from their feelings in order to work with them. I asked Dave to not just imagine Stoner Dave, but to  physically "locate" Stoner Dave in the room. He described Stoner Dave as standing by the door, slouching and looking like he felt out of place.

Next I asked him to locate Sober Dave in the room too. Sober Dave was sitting in a chair at the table opposite us. Dave’s description of him in his Secret Service style sunglasses and suit reminded me of Tommy Lee Jones in the movie Men in Black.

Tapping With A Marginalized Part

Borrowing from some of the concepts of Matrix Reimprinting, I asked Dave if he’d like to tap with Stoner Dave. We’ve used this exercise in parts work before and Dave has liked it and felt progress from using it.

Holding space for someone to tap with a marginalized or frightened part of him or herself is always a sacred experience for me. To hear someone address a part of themselves tenderly and with intention is to witness the miracle of self-healing.

As I tapped along silently, Dave led a beautiful tapping with this part of himself. This moment in the session was too focused and the work was too deep for me to jot down the exact words that Dave used during the tapping, but I recalled afterwards that he explained the function of tapping to Stoner Dave and led him through several rounds.  He reassured Stoner Dave that he could use this technique when he felt like using and that Dave would always be there to help him.

After he finished the tapping with this part of himself, he reported Stoner Dave looked more relaxed and said he liked the tapping.

Of course, there was another part to address, and that was Sober Dave. I asked if he wanted to offer some tapping to Sober Dave. He felt that Sober Dave respectfully declined and remained on alert for any funny business—such as tapping being a way for Stoner Dave to get around the rules. We let Sober Dave continue to do his job his way for now.  We closed the parts portion of the session and brought Dave back into the here and now.

At the end of the session, I re-tested by asking Dave how he felt about the doctor's diagnosis for his shoulder, and hearing that he would not need prescription pain medication.  He felt a lot of peace about his shoulder, and no longer felt craving and nostalgia for the idea of a Vicodin holiday.

Ange Dickson Finn is an EFT International Accredited Certified Advanced EFT Practitioner. She is based in Houston, Texas, and works with clients in person, over the phone and via Skype. Ange specializes in helping clients relieve stress and learn to thrive. As an equestrienne, she especially enjoys using tapping with horses and their riders. Visit her on the web at www.TapIntoYourself.com.

From the EFTfree Archives, which are now a part of EFT International .
Originally published  Jan 18, 2015.