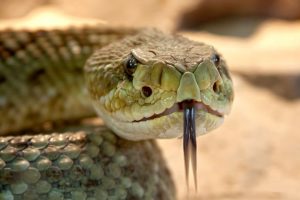 Some phobias can be with us from birth. They may develop as the result of life experiences.  Or they may arise from a variety of other causes.  An interesting fact you may not know is that it is possible to be unaware you have a phobia until you are exposed to a trigger.

Julie, a college student, was a passionate equestrian from a very early age.  She contacted me because an unexpected turn of events in her life filled her with enough fear that she became terrified at the thought of riding.

One morning on a mountain path, leisurely savoring every moment, both she and her horse were startled by the sudden appearance of a snake. The snake was equally startled and reactive! The naturally docile horse bolted, further frightening Julie.  However, being a seasoned rider, she soon managed to calm the horse and regain her composure.  It was her first encounter with a live snake.

Julie felt this was purely a traumatic response to the event, and felt certain that, if we tapped through it, everything would return to normal.

We carefully worked through each aspect.  While Julie generally enjoyed a great sense of relief, sweaty palms, rapid heartbeat, and shallow breathing would return each time she visualized herself riding.  She felt clueless as to why.  She could now easily recount the story and not have a reaction.

We began to dig a little deeper, and included tapping to have the unresolved aspect or event to reveal itself.  Still nothing.  Then, appearing embarrassed and uneasy, head hung low, Julie prefaced her comments to me with:

This probably isn’t related, but I just remembered….

What came to mind were pre-school days, when Julie's parents were in the process of establishing a new business.  Frequently they would have her watch the same children’s video to occupy her while they were busy.  It included a scene where a small seemingly harmless snake in a matter of seconds turned into a gigantic snake and swallowed the heroine.

Julie hadn’t thought of the movie in years, but as she described the scene in the movie, panic symptoms were beginning.  This was in spite of my surrogately tapping for her as she told the story.  I asked her to take a break from telling the story, and suggested we do a few deep breaths and tap for a few moments to help her return to a calm and centred state.

With that accomplished, we tapped on anticipatory anxiety, and about recounting the scene.  We then tapped on the little girl’s fears and feelings about watching the video all alone with no one to comfort, console or protect her.

Julie had then reached the point where she felt ready for the ultimate test, riding down that same trail.

The following afternoon Julie called to share the story of her successful ride that believe it or not included a snake!  Fortunately the snake was moving parallel to the trail this time.  The horse remained calm and Julie was unaffected.

Several months later she was still doing great, and was now laughing about the impact of that childhood video.

Perhaps you are familiar with tapping and having an aspect reveal itself? If so, I do hope it is something you employ frequently.  If you’ve never tried it, consider giving it a try.  It is amazing how long forgotten pieces of the puzzle or what may seem irrelevant will surface.  Especially when it seems that every possible aspect has been unearthed, and every approach has been employed.

Remember that memories we have stored away, and often think no longer bother us, are stored on a cellular level.  Our bodies remember. Many times when we least expect it, we quickly learn that these memories remain relevant and deserve our attention.

I would love to hear from you, so please do let me know if you have any questions or if I may be of assistance.