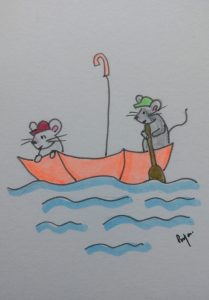 I’m sharing a personal experience of my home being flooded and how I used EFT to stay regulated and make critical decisions.

In November this year, my home flooded. This wasn't my first encounter with flooding. The flood I experienced in 2015 was very stressful. There was no electricity, water, or mobile connectivity for five days. But the recent flood was an altogether new and frightening experience.

It had the elements of trauma - Unexpected, Drastic, Isolating, No strategy (UDIN).

When the rains started in the first week of November, I was certain that water wouldn’t enter our home. We've been in this house for two years, and although we had a storm last year, there was no flooding. Our locality was one of the few that wasn’t affected by the rain. I thought this year would be the same.

However, on the night of 10th November, at 3:30 am, my husband woke me up and told me that water was coming into our living room. When I went down to the ground floor (in India the floor of the building at street level is called ground floor and the one above is called the first floor), I saw water rushing in from our garden and the back of our house. I froze with shock for a few seconds. I couldn’t believe what I was seeing. At least during the 2015 flood, we had been safe - no water hadn't entered our living room. But what was going to happen now?

My mom and I decided to take all the important documents upstairs. Later, she told me that she'd seen me tapping on my fingertips in a robotic manner time and again.

The water level kept rising. While I was running up and down, my husband was figuring out a way to drain the water from our garden. Our motor hose broke, so my husband had to hold the hose in the water to pump it outside. I waded in and out with whatever he needed. I can remember the sound of the rain, the wind, the leaves rustling, the water rising, and the creepy crawlies in the water.

These were the visuals, sounds, feelings, smells, etc (VAKOG) that I needed to process later using EFT.

Occasionally, I would stop and look around. I would then feel overwhelmed and tap. I remember sitting on my chair with my legs in the water, tapping on the overwhelm.

I did silent tapping, touching and holding the points on my face. I also repeatedly pressed my gamut point.

The most frightening thought was that the sewage system would overflow and we would have to leave our home. The neighbouring areas were flooded, and finding shelter elsewhere seemed impossible. These thoughts gave me palpitations. At one point, I had an overwhelming urge to flee the house. I tapped again. Whenever I tapped, it helped me come back to the present.

When we’re stressed, the frontal cortex (our thinking brain) goes offline. Tapping helps to get it online again.

Eventually, we all decided to take a break. When I went up to my bedroom on the first floor, I nearly had a panic attack. I had been running up and down so many times without any fatigue. But finally the adrenaline rush was over. I felt like I was going to collapse. My palpitations increased. I had chest heaviness. I couldn’t speak.

Catastrophic thoughts cascaded onto me. I was afraid that the whole house would become flooded. My mom and I kept tapping together on our anxiety.

As I was sat on my bed, I thought to myself, “Just let your body do what it needs to do. You’re having a meltdown and that’s okay. Allow it to happen.” I cried, and I tapped. Slowly the symptoms subsided. I lay down, but I couldn’t sleep. The rain didn't stop, and the water level kept rising.

The next morning, we called a plumber. For nearly seven hours, we were involved in draining the water through a petrol pump into buckets. Whenever the pump stopped, my anxiety would increase, and I would pause and tap.

Even though I’m anxious, I completely accept my anxiety.

Even though I’m anxious, it’s normal under these circumstances.

I told my clients that I wouldn’t meet them that day because of the flood. I was only able to be mindful of my surroundings and do this because of tapping. For the next couple of days, whenever it rained, I got anxious.

I knew that rain had become an external trigger - it had become associated with a frightening event. If I didn't tap on it, the association would stay.

The aftermath of the flood has been equally bad. We dealt with continuing rains, contaminated water supply, and I became sick. After ten days, there was more flooding. The water came into the house again, and sewage into the garden. But this time, I was much calmer. We were also better prepared.

Now, with ongoing rains, we continue to have issues. Tapping has helped. I had a session with an EFT practitioner. We tapped on the night of November 10th.

The tapping was slow and gentle, as it should be for a traumatic memory, while measuring and testing for each crescendo of the story. At the end of the session, we put what was left (the aftermath of the flood) in a box using the container technique. I worked on this later with another practitioner.

The gruelling task of coping will continue until the rains subside and the sewage drains.

The purpose of writing this article is to emphasise how important it is to have tools like EFT to help us during a crisis. It helps reduce overwhelm, keep our thinking brain active, prevent freeze response, reduce anxiety, stay regulated, and most importantly make critical and quick decisions.