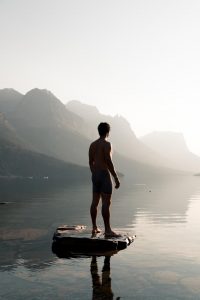 Kieron Devlin's recent article, Using EFT in Dreams, got me thinking: When I remember to acknowledge and remember my dreams, they can become powerful personal resources for me. (You can find that article by searching this site for the author's name.) This morning I found myself tapping intentionally around some dream scenes, which at first didn't seem like a big deal. However, as I trusted, tapped and worked through each of them, I began to get some surprising perspective shifts and relief around stuff that had been bothering me...

This morning I awoke with a memory of some very specific dream images and feelings. At first, they were unclear, only a few moments strewn together. Because the people in the scenes were familiar enough, it would have been easy to dismiss the memories casually as, "just a dream," which I had often done. Today, however, I felt a little differently, because I was keenly aware that there was soreness in my jaw - a clear sign from my body that something was bothering me. Could the dream be worth exploring? Since I was already awake, I decided to sit on the edge of the bed and try to recall (and tap on) whatever feelings and scenes I could remember, even if they didn't seem immediately important. As I began to follow and describe to myself the seemingly disparate images and feelings, several parts became more vivid (as they often do when I give small pieces of a dream my immediate attention). Soon I began to realize that the scenes and emotions involved were very significant for me.

The image I kept coming back to from the dream was the image of a former roommate, whom I'll call Rachel. In the dream, Rachel and I were in a garage that I remembered from earlier in my life, and she was attempting to convince me to clean it out, which she had already started to do. As I looked around, I could see the garage becoming highly organized, almost like an art exhibit. I also noticed that being in there with her was very uncomfortable for me - and that I was quite irritated with her.

Give the Scene a Name

It is no secret to me that my memory of Rachel in real life is still highly charged. While it has been several years since we lived together, I still find it difficult to think about her, and picturing her still brings up intense negative thoughts and feelings. In this dream, I felt angry that she had somehow been "right" and also that she was being so presumptuous as to tell me what to do with the garage.

Thinking of Rachel in this way also reminded me of another part of my dream - a part where I was angry at my brother for trying to "force the issue" on something. So I made note of this to tap on later.

The more I returned my focus to the Rachel dream scene, the more details began to surface. Instead of just tapping all over what was happening in my mind, I decided to give the scene with her a title, which is an empowering and highly effective way to work with EFT. From my barely half-awake state, I decided to title the whole Rachel episode: Rachel Was Right. (Note: Like a version of the Movie Technique or Tell the Story, it is beneficial to give a painful memory or group of feelings a name. As part of this process, it also helps to rate the Intensity Level so we can test our progress later.) The intensity of this "title" was about an 8 out of 10, and I was aware that I had chosen a fairly provocative title for myself - but I decided to go with it. I also could recall a clear visual of Rachel moving boxes around and generally acting in what I considered to be her typically grandiose fashion - so I decided to use that too.

So, while picturing whatever images showed up, I began speaking and tapping on the Karate Chop point:

Tapping through the Sequence:

Top of the Head: Rachel was right

As I began tapping on each point in the sequence, some new realizations began to dawn on me, so I intuitively began to say whatever came to mind on each of the points. I knew I was on the right track because (1) I began feeling better and (2) my eyes and nose began watering like crazy:

Eyebrow: I was right too, she was taking over and that felt wrong to me
Side of the Eye: Rachel was right, and I was right too
Under the Eye: Our communication was poor, I never told her how much I appreciated her cleaning the basement (Note: this never happened in real life, but there were both conscious and unconscious parallels I was peripherally aware of)
Under Nose: I can't stand that she was right! I hated that she was right...
Chin: Her grandiose behavior drives me nuts, but what she is doing is making a difference and making the garage a more special place

Weaving in Other Related Parts of the Dream

Collar Bone: I see the other neighbors across the street are appreciating our work. One guy across the street wants us to put his tree in our garage, and this feels good (Note: This is the dream folks, I'm just calling it as I remember it!)
Under Arm: Rachel's work took us to a new level, I guess
Top of the Hand: It feels good to be have this level of communication with the neighbors, I'm in their garage now, looking at a big tree.

Going Back to the Original Title and Intensity

At this point in the tapping process, I notice there is not much charge left on the Rachel part of the dream. In fact, when I think of my relationship with Rachel in real life, my thoughts of her do not hold much intensity at all. While I don't particularly want to meet her for tea, the anger and shame has dissipated greatly - which is a huge relief. Also, I notice that my jaw is no longer sore, which feels awesome! Next I move on to describing the dream images I have involving anger towards my brother, which I handle in similar way, tapping for "this brother anger," while acknowledging the visual impressions I'm getting.

At this point I am aware of another component to the dream - an element of danger and a feeling of "unsafe." I know I feel this, because when I picture one of the dream scenes involving one of the neighbors across the street, I get a distinctly familiar feeling in my stomach - one having to do with a significant traumatic group of events in my life. During other EFT explorations of these events in the past, I had given them the descriptive and somewhat innocuous name, "The Puppet Show." I know what this title means to me, so I decide to give this lingering part of my dream the name: "This Remaining Puppet Show."

I gently tap my Karate Chop point as I describe the scene and the title:

Even though I have this remaining Puppet Show, and all it means to me, I am slowly working through this...
Even though I see that man across the street, he's involved in some dangerous stuff, some Puppet Show stuff, I accept myself anyway.
Even though I feel this Puppet Show in my body, in my stomach, and it obviously still bothers me, I love and accept all of me and all the parts of me...

Just to test, I began to replay each part of the dream I could remember - everything from Rachel's activities to the conversation with my brother to the man who brought up the feeling of "unsafe." Nothing carried a charge anymore. My jaw, which is always my barometer for stress, felt relaxed and nothing, not even "The Puppet Show," could dampen the lightness I was feeling.

Tonight, as I write this and recall this morning's session - it feels empowering to know that as my body speaks, I might be able to learn to translate its signals more effectively. This process has also made me resolve to pay more mindful attention to the thoughts and feelings present in my dreams from now on.

From the EFTfree Archives, which are now a part of EFT International .
Originally published on September 8, 2010.