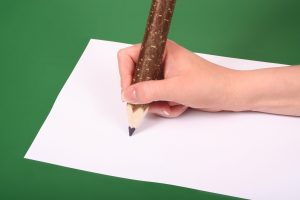 When a client says, ‘This pain feels like a screw twisting in hot oil’, I happily tap along with him or her

I feel confident that this extremely specific personal focus, involving more brainpower than just ‘this pain’, will likely lead to the pain reducing or disappearing, possibly in a short time.

But tapping with a symbol? How does that work?

Lorraine was a troubled young woman with a history of parental abuse and depression. She was so distrusting of people that she would take only jobs with children or animals, objects of her care who she felt did not pressure her.

During her first tapping session with me, Lorraine would not make eye contact, but sat facing away while we worked. She later explained that she had felt ‘too worthless’ to make eye contact. Over five sessions Lorraine responded profoundly to the lightening effects of EFT, to the point where she was able to say,

‘It’s amazing how helpful these tapping processes are. I used to hate myself and I often felt suicidal, but I don’t since having these few sessions.’

But she came to her next session again unable to face me. She seemed to be shrinking in her chair.

‘What’s upsetting you?’ I asked.

‘I feel yuk. I’ve got black in my heart area. I woke up today feeling in huge danger and I don’t know what it is.’

Was this danger actual? Or was her subconscious processing some past trauma through a dream? As my client room was a safe place, our first step was to relieve the fear.

Obviously I had choices among possible techniques to use here. Lorraine was ‘speaking metaphor’, so I decided to mirror that. We could have gone into the problem via ‘black in my heart’, or I could have asked her to be more specific, as in ‘feeling in huge danger as if…?’ Yet I heard myself say,

‘This huge danger. If you could see it as a symbol, what would it look like?’

This image was stark enough to serve as a warning sign in any Dictionary of Symbols. I recalled a definition I’d learned studying Reiki: ‘a symbol is a living force field’ -- which might be why I felt myself involuntarily jerk back away from it.

Definitions of metaphor and symbol

The Oxford Dictionary defines a metaphor as:

and a symbol as:

• ‘a mark or character as a conventional representation of an object, function, or process’.

Here was ‘a mark or character’ (not ‘a word or phrase’) that encapsulated a ton of meaning for Lorraine, far more than its appearance as a serrated line.

The importance of tuning in

According to EFT founder, Gary Craig, tuning in is EFT's main requirement.  As a way of tuning into Lorraine’s specific problem, I felt this symbol's shock value made it available for immediate use. It enabled her both to dissociate somewhat from the problem and at the same time to deal with the problem … with a minimum of words.  Her whole experience of fear of unknown danger since she’d woken up was encapsulated, condensed, into a simple line. If I'd felt it necessary, I'd have invited her to draw the symbol, but right then I didn't want to lose momentum.

‘Terrified of this jagged black line’

After a couple of rounds of this, I asked Lorraine to check on the image of the jagged black line. She reported that she could still see it in her mind, but it was no longer heavy. We continued to focus only on the jagged black line for several more rounds, checking the line often. The line not only faded; it soon totally disappeared.

Lorraine suddenly turned and faced me, looking directly at me with wide open big blue eyes. ‘I’m OK now,’ she said, 'It's a zero.' (I had trained her to voice her intensity numbers out of ten --) . I asked if she had any idea what had frightened her, what the symbol had represented. ‘Are you actually in danger?’ I asked. ‘No, it was from back there,’ she said, ‘But it’s all gone.’

The time we took to dissolve the terror that had devastated her since she woke up that day was only about three minutes. I reminded her that if a similar feeling came up again when she was not in session, she could do the same process again, or call me.

Was it necessary to understand further?

Did we - do we - need to know more about it? I’d say, only if the problem returns.

We don’t always have to dot the i’s and cross the t’s. What is going on inside us can’t always be put into words. Do you experience that?

What symbol comes to your mind? Could you use it to heal yourself?

Annie is an Accredited Certified EFT Master Trainer.  She specialises in working with trauma and chronic issues.