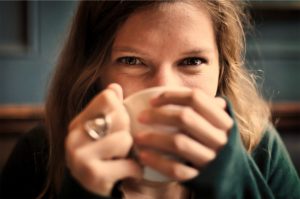 Life after doing some EFT (Emotional Freedom Techniques) in the morning

This story was an unexpected one from a friend of mine who uses EFT occasionally but would not, under normal circumstances, suggest it to someone else or use it in such a public place.

One Saturday night, Laurence had supper at home with her friend, Maude, after which they decided to go out dancing.

They had had quite a lot of wine with their meal and were on the metro (subway, in Montreal-speak) heading to the club when Maude started feeling quite queasy. She told Laurence that she wanted to get off the metro because she might need to throw up.

Without missing a beat, Laurence, fairly inebriated herself, told Maude, "Just do everything I do." Right there in their corner of the metro, she showed Maude where to put her fingers on her karate chop point and led her through a few rounds of tapping.

This happened in French and I wasn't present so I can't give you the exact wording but my understanding is that they simply focused on the symptoms that Maude was experiencing in her body; the queasiness in her stomach and the wanting to throw up.

The upset stomach eased off as they tapped and by the time they got to the nightclub both ladies were able to resume partying. They went on to enjoy their night of dancing without another hitch.

Maude was so impressed by the results that she thanked Laurence a number of times over the evening and has even mentioned it to her a couple of times since then.

I just laughed out loud at the picture of the two tipsy young ladies tapping away in the metro on a Saturday night. What a great application of "emergency" EFT!

From the EFTfree Archives, which are now a part of EFT International .
Originally published on Jan. 10, 2016