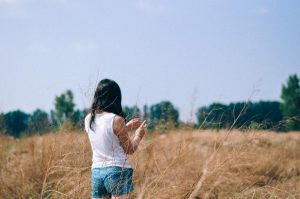 "Margaret Ann" has never taken an EFT class or had a private EFT session. Her knowledge of how to tap has come from my verbal instruction over the phone, YouTube videos and EFT books. She is particularly drawn to the work of the Ortners, having first seen their full-length movie, "The Tapping Solution," several years ago.

Margaret Ann struggles with overeating. A few years ago she used tapping every morning before she went to work, spending a few minutes tapping on a topic related to her eating behaviors and then returning to the topic the next morning. She kept notes so she would know where she left off. She took ratings of her feelings (0 to 10, 10 being the worst) to keep track of her progress. She estimates that she spent an average of 5 minutes each morning tapping. And even that little bit of tapping helped her feel better at the time.

But when she retired her morning routine changed and she got out of the tapping habit. Now, 2 years later, Margaret Ann is at her heaviest weight and feels great disdain when she looks in the mirror. We were talking about this recently and I suggested she spend 15 minutes tapping while she focused on her feelings when she looked in the mirror. (Remember, with EFT we focus on the truth, no matter how painful!)

She set the timer for 15 minutes and started with the set-up statement, "Even though I feel like I'm so fat when I look in the mirror, I deeply and completely accept myself."  She started at an intensity of 10. She really didn't like what she saw!

As she focused on her strong disdain for her image, repeating the negative self-talk as she tapped on the points, her intensity fell to a 6, then 5 and lower. She started feeling kinder to her image. She began saying sentences like, "I've been so hard on you.  You deserve more than this. You wouldn't talk to a friend like this.  I love you now and appreciate all that you do." In 15 minutes she had gone from a 10 to a 0.

Margaret Ann started with where she was at and then let herself follow where her new thoughts and feelings were taking her. This is a beautiful example of letting the tapping do the work!

After that marathon session, she felt calmer inside, almost like magic. (Yes, she used the word "magic.") She wasn't sure she could believe it. At 3pm that day, she didn't feel the usual panic about her snack.

Days later at the Super Bowl party, where Margaret Ann said she had never seen so much food on a table, she ate the food she intended to eat and then felt "finished."  She was surprised she had lost interest in eating more. This was not typical!

Several days after the first 15-minute tapping session, she had another timed 15 minute tapping session when she focused on when her overeating started.  This was 20 years ago, right after she married her second husband.  Along with the man of her dreams came financial difficulties and a blended family of teenagers. This was a time of a lot of fear for Margaret Ann.

Again she tapped and tapped with many aspects coming up: financial insecurity, fear of bad teenage behaviors, fear of having to get a job, etc.  Her intensity dropped from an 8 to a 5, then 2 and finally zero.

Finally, a third time she tackled both topics again, this time for 30 minutes! Even though her beginning number was low because of her previous tapping, she kept tapping anyway. Her words eventually turned into a beautiful, comforting prayer, asking for help from her God. "There's no reason for me to panic anymore," she said.

It Pays To Plan

For Margaret Ann, to tap this way took some planning. It was important to set a timer and to tap to zero. This required a private place with no interruptions. But she feels calmer in general now, which she attributes to the tapping. She especially likes the new calm she feels around food.

Her next topic, uncovered while tapping, will be about why she likes to eat at bedtime. Margaret Ann remembers enjoying bedtime snacks with her father. But she wants to stop eating at bedtime now.  I can't wait to hear what happens with that session!

Ann Smith is an EFT International Accredited Certified EFT Trainer and Advanced Practitioner. She has a private EFT practice and also teaches EFT in a variety of settings. She also mentors her students to their practitioner certification. Find her on her website: www.insideoutwitheft.com

From the EFTfree Archives, which are now a part of EFT International .
Originally published on September 12, 2015.